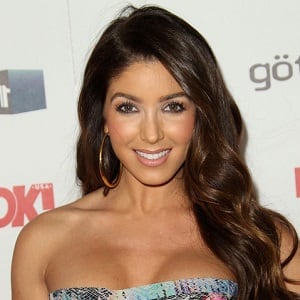 Melissa Molinaro previously dated Reggie Bush. Currently, she is a married woman. She is married to Bryan Kowalski. The pair married on 2 October 2016. She gave birth to the couple’s first child, London Rose Kowalski who was born on 4 February 2019. Their marriage is going strong as there is no news regarding any extramarital affairs at present.

Who is Melissa Molinaro?

Melissa Molinaro is a Canadian-American pop singer, choreographer, model, and actress. for her reality TV appearances on ‘Making the Band 3’ and ‘Pussycat Dolls Present: The Search for the Next Doll.’ Additionally, she also co-starred in Dolph Lundgren’s action film, ‘Command Performance.’

Molinaro was born as Melissa Ann Smith in Whitby, Canada on June 4, 1982. She was born to parents Divina Smith and Stephen Smith. As a child, she enjoyed figure skating and gymnastics.

Melissa is of Canadian and American nationality. Furthermore, she belongs to the mixed ethnic background of Italian and English.

Molinaro was initially signed to a production deal with Interscope Records. In 2002, she appeared in ‘High Crimes’, ‘Prep’, and ‘Journey of Redemption.’ In addition, she also had roles in ‘Grounded for Life’, ‘Destiny’s Child’, and ‘Happy Family.’ In 2004, she played the role as JT’s Love Interest in the TV series ‘The Young and the Restless.’ Since then, she has appeared in several other movies and television series. All in all, she has over 20 credits as an actress.

Some other movies and television series that Molinaro has appeared in include ‘Fixed’, ‘Hit the Floor’, ‘Street’, ‘Franklin & Bash’, ‘School Dance’, ‘Second Generation Wayans’, ‘Jersey Shore Shark Attack’, ‘The Game’, ‘Honey 2’, ‘Balls to the Wall’, ‘How I Met Your Mother’, ‘Brothers’, ‘Command Performance’, and ‘Rodney’ among others. Furthermore, Melissa has also released the album titled ‘The Love/Dance Project’ and a compilation album, ‘Soul By The Pound.’

Molinaro has not been linked with any award nominations in her career.

Molinaro has not revealed her current salary. However, she has an estimated net worth of around $ 8 million at present.

Molinaro became part of a controversy after it was reported that Kim Kardashian was taking legal action against Old Navy for a recent ad campaign featuring Melissa. At present, there are no rumors concerning her life and career.

Also know more about the early life, career, net worth, relationships, and controversies of other singers like Adele, FKA Twigs, Louisa Johnson, Betty Who, and Jenna McDougall.