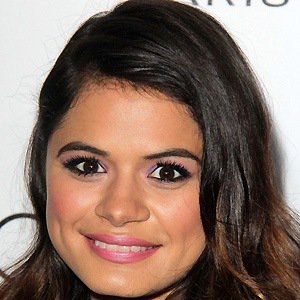 “I loved high school. I had the best high school experience of all time. I know that's not a common feeling, but it's the best. You're like, you know, 14 and expressing yourself on a daily basis creatively? That's pretty incredible.”

What is the relationship of Melonie Diaz?

Melonie Diaz is currently single. Previously, she was in a relationship with Victor Rasuk who is an actor. The duo started dating in 2013 and got engaged in the same year. However, they could not give their relationship the right way and got separated. After that, she has not been linked with anyone. She is currently living with her family.

Who is Melonie Diaz?

Melonie Diaz is an American actress, professional model, and social media influencer who is best known for her performance in the movies like ‘Hamlet 2’, ‘A Guide to Recognizing Your Saints, and ‘Lords of Dogtown’.

She was born in New York City, New York, USA on April 25, 1984. She is currently 34 years old. Her parents are of Puerto Rican descent. Her father’s name is Carlos Diaz and her mother’s name is Beatriz Diaz. She was raised with her elder sister, Mercedes Cita Diaz on the Lower East Side. The actress was bitten by the acting bug during her time at the Henry Street Settlement.

Her hobbies are shopping and traveling.

Melonie holds American citizenship and her ethnicity is Puerto Rican.

She developed her passion for acting during her time at the Henry Street Settlement. Then, she studied at Performing Arts High School in Manhattan. Later, she earned her degree in Film Production from the New York University’s Tisch School of the Arts. She has made a desire to return to ‘Tisch’ in order to complete her degree in filmmaking.

Melonie Diaz debuted her film career in ‘Double Whammy’ with a supporting role as Maribel Benitez in 2001. After that, she landed in the films ‘From an Objective Point of View’ as Kelly and ‘Raising Victor Vargas as Melonie’ in 2002.

Then, she made herself more recognized from the role of Blanca in the film Lords of Dogtown in 2005 and Young Laurie in the film ‘A Guide to Recognizing Your Saints’ in 2006. In addition, Melonie appeared as Anna in ‘Itty Bitty Titty Committee’ in 2007, Cristina in ‘American Son’ in 2008, and Gwen in ‘She Wants Me’ in 2012.

In 2013, she portrayed the role of Sophina in the film ‘Fruitvale Station’ which is a film based on the shooting of Oscar Grant.

Melonie Diaz has an estimated net worth of around $1 million as of 2022, which she earned from her professional career. Apart from her acting career, she is also involved in a few endorsement deals which adds more to her total assets.

There is a rumor that she has been dating her alleged boyfriend and ‘Black Panther star Michael B. Jordan. But neither of them has confirmed the rumor.