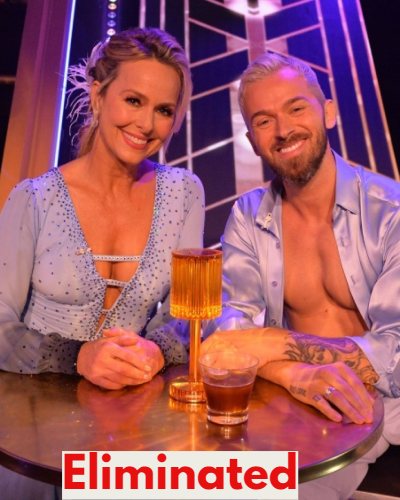 Actress Melora Hardin and her Dancing with the Stars partner Artem Chigvintsev are eliminated! They were sent home on the Semifinal round of the competition on 15th November 2021. Now the finalists of the contestants are JoJo Siwa, Iman Shumpert, Cody Rigsby, and Amanda Kloots.

Even though, Melora has been eliminated she focused on the positive side. She said,

“My body is looking incredible, according to my husband! I’ve lost 12 pounds. hat’d be, like, the lowest thing I would say I’ve gained. I’ve gained so much from Artem, like, from just the amazing dancing that he has made me do and helped me do … and learning how to dance with a partner is so extraordinary. It’s unlike anything else.”

Hardin also thanked her partner Artem for being with her and revealed that they developed a beautiful friendship.

Melora Hardin is happily married to Gildart Jackson since 4th June 1997. They met each other at a wrap party. The Office actress has been maintaining a successful married life for almost 2.5 decades. Their daughters Rory Jackson were born on 29th September 2001 and Piper Quincey Jackson was born in 2005.

The family of four appeared in the 2009 project You of which Jackson said,

“My wife Melora Hardin and I made ‘You’ with our family. Rory and Piper, our children, are both in it. My parents-in-law, our nanny, our friends … Those friends who don’t act helped by giving us locations, pulling cable on set, and, most importantly, bringing their signature dishes at lunch and dinner to feed the ravenous cast and 20crew.”

How much is Melora Hardin’s net worth?

Melora is an American actress and singer. Similarly, she is also well-known for her roles as Jan Levinson on NBC’s The Office and Trudy Monk on USA’s Monk.