Memphis Depay has played for many teams such as PSV Eindhoven, Manchester United, Lyon, and many more. 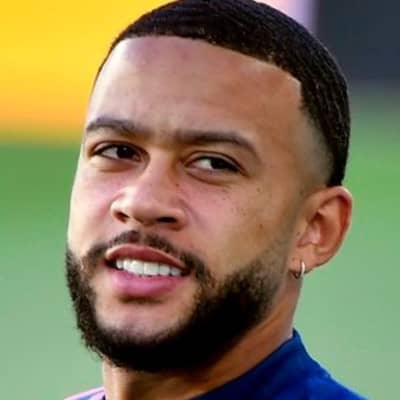 Memphis Depay’s relationship status at present is possibly single. He has not shared the details of his girlfriend or affair.

Previously he exchanged a ring with Lori Harvey in 2017.

Who is Memphis Depay?

He has played for many teams such as PSV Eindhoven, Manchester United, Lyon, and many more.

His birthdate is 13 Feb 1994 and he was born in Moordrecht, Netherlands. The name of his mother is Cora Schensema and his father’s identity is Dennis Depay.

His dad’s relationship started to get worse with Cora and in 1998, Dennis left the family. Due to this, Memphis separated his parental surname from his name.

Further, his ancestry is a mix of Dutch-Ghanaian and as per his academics, he passed out from high school and then joined a college.

Memphis Depay as a football player started his journey when he was a teen. During this time, he first played for Moordrecht from 2000 till 2003, then he joined Sparta Rotterdam from 2003 till 2006.

For five years, this player was with a club named PSV Eindhoven (2006–2011). He continued to play for the same team till 2015. After this, he was signed by the reputed Manchester United in 2015. With them, he played several matches for two years and then shifted to another club Lyon (2017-2021).

Leaving his previous club, he joined signed a contract with Barcelona and is still with them.

Memphis is also a great singer who has contributed his voice in several tracks. His first track was released in 2017 titled “LA Vibes feat. Quincy Promes”. The other songs sung by him are “Kings & Queens Freestyle”, “No Love”, “Fall Back”, “Lange Jas feat. Memphis Depay”, “Body Like You feat. Zah Santori”, “For A Week”, “Blessing”, etc.

By 2022’s sources, he has an estimated net worth of $2 million. Additionally, his yearly salary is reported at € 5 million with his current team.

This football player of Barcelona Club is keeping himself away from scandals as well as rumors. But when he posted a picture with baby Ligar in April 2020, it was questioned by animal rights organizations.

Memphis Depay’s height is 5 ft 9 inches and his body weight is 78 kg. On top of that, he has black hair and eyes in dark brown color.

This soccer player is a tattooed man as he has inked several body parts. He has a tattoo on his left arm which he made in memory of his grandfather. He also depicted Christ the Redeemer and wrote 18.06.14 on his left torso.

his inner lips have a word succesvol and he wrote dream chaser on his upper torso.

Memphis is officially present on social sites such as Twitter with over 2.1M followers and on Instagram with around 13.5M fans.

He is also available on Facebook and TikTok with over 5.6M and 2M fans respectively.