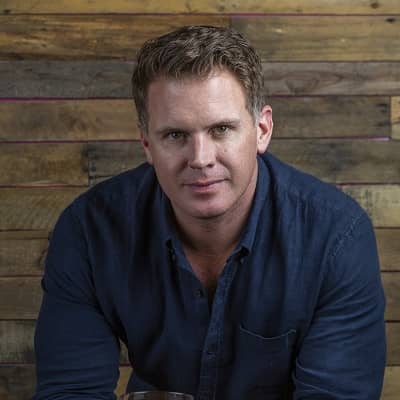 Memphis Garrett was previously married to his ex-wife, Ashley Zuppas. The couple dated for some time before tying the knot on May 6, 2012. They were blessed with a son, River Waylon Garrett (born in April 2015). Their relationship couldn’t last long and got divorced.

Eventually, he began dating Amanda Lynn after his divorce and they parted after 3 years in 2018. He then dated his former high school girlfriend, Dominique “Dom” Scalise. On December 1, 2020, they also parted ways.

Finally, he got in a relationship with Big Brother 22 houseguest Christmas Abbott. She is also a former contestant of BB 19. The couple got engaged in June 2021. They tied the knot in a ceremony at the State Railroad Museum in Savannah, Georgia on Saturday, May 28, 2022.

Memphis looked gorgeous on Tom Ford while Christmas was beautiful on a stunning gown from Laura Nagle. They exchanged wedding rings from Adam Campbell and David Yurman.

Who is Memphis Garrett?

Memphis Garrett is an American reality TV star who is a restauranter by profession. Likewise, he is popular as a runner-up on “Big Brother 10” and as one of the ex-contestants on “Big Brother 22 All-Stars”.

In addition, he is the third houseguest who is able to pass through to the Final Two without winning a Head of Household competition.

He was raised by a hardworking single mother in his hometown. Memphis never experienced the love of a father but he was always supported by his mother and an elder mother.

His mother was a waitress at a bar and he used to go with his mother and learned to earn money. As a result, he was already making money at the age of 12 by selling Fake Nike sports shoes.

Garrett holds the citizenship of America and his zodiac sign is Sagittarius.

Furthermore, He completed his graduation from Florida State University earning an Associate’s Degree in Business.

Memphis Garrett first started his career as a bartender at a bar. He was a mixologist then. After accumulating experience, he was ready to start his own business and left the company to start up his own restaurant. Currently, he is the owner of 37 restaurants.

He was a contestant on season 10 of Big Brother in 2008 and won his first-ever challenge as a cast member on the show. He made it to the finals but can’t win against Dan Gheesling and he ended up in runner-up position. After that, he didn’t appear on tv for almost 12 years.

Finally, in 2020, he re-entered the house of Big Brother in its 22nd cycle of “All-Stars” and also became the first person to win HOH and POV in the same week on Big Brother 22.

Garrett has earned a hefty amount of money through his appearance in the TV series and from restaurants. His net worth is estimated at around $4 million.

Although he is one with the Big Brother show, he has not yet made headlines linked to any major controversies.

There are also no negative or false rumors about him or his personal affairs in the media. However, Big Brother has been somehow controversial throughout the year.

Garrett stands at a height of 5 feet 11 inches and weighs around 89 kg. similarly, He has light brown hair and charming brown eyes. Furthermore, he has an athletic body figure measuring 35-36-37 inches and he fits an 8(US) shoe size.