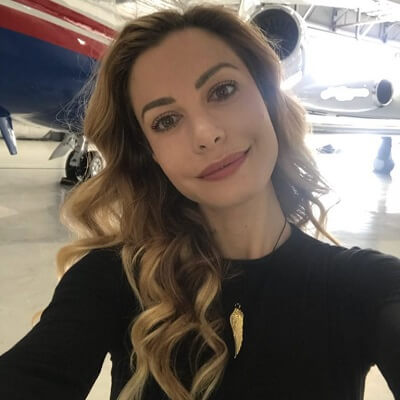 Who am I?...I don't know...I'm always changing....hopefully I'll never be able to define myself with words.

Meredith seems to be single. She is not involved with anyone right now.

Previously, she was in a relationship with Derek Theler. He is an American actor and model best known for his work in The Hills, American Gods, etc. She dated him in 2010 and broke up the same year.

Prior to that, she dated Tanner Beard. Beard is an American actor, director, and Businessman. He is the CEO of the Silver Sail Entertainment and Mammoth Film Festival. She dated him from 2009-2010.

Who is Meredith Giangrande?

Meredith Giangrande is an American actress and model. She has made appearances in various movies and TV shows such as General Hospital, Two and a Half Men, Parental Payback, and more.

Meredith Giangrande was born Meredith Jeanne Giangrande on July 2, 1981, in the small town of Myersville in Maryland. As of 2020, her age is 38. She was born to parents Gary Giangrande (father) and Robyn Sanson Giangrande (mother).

She was born as the oldest child of her parents and has two younger brothers, Justin J. and Kyle Andrew. Justin is also a model. She spent her childhood days in Myersville.

Talking about her education, she completed her high school education in 1999 from Middletown High School.

Meredith Giangrande started her career as a photo model. She modeled for small campaigns from local agencies. Her first acting role came in 2002 in an episode of the popular TV show, ‘CSI: Crime Scene Investigation’.

A couple of years later, she appeared in the short film, ‘In a Nutshell’. After participating in beauty pageants and also making her name as a model for some years, she started getting roles in movies, too.

The same year, she appeared in an episode of the popular soap opera, General Hospital. She had her first topless appearance on-screen on Pool Party. In 2008 she portrayed Nova in ‘Ring of Death’.

Some of her other acting credits include Monk, Fast & Furious – new modem  Party Animals 3 – Welcome to the university, Valley Peaks, The Legend of Hell’s Gate: An American Conspiracy, etc.

Furthermore, she also appeared in Bucky Larson: Born to Be a Star, The Mentalist, Dexter, Parental Payback, Two and a Half Men, etc.

She is represented by the ‘Aqua Talent Agency’.

Giangrande stands at a height of around 5 feet 4 inches. She weighs around 52 kg. Her body is slim and has measurements of 34-25-35 inches for breasts, waist, and hips.

Her hair color is blonde and she has a beautiful pair of hazel eyes. She wears a shoe size of 8(US).

Meredith has not been involved in any controversies. She has been successfully keeping herself away from controversy and scandal of any kind. So far, she has not done anything controversial in her career. Similarly, there are no rumors about her of any type.

You may also like to read the Bio, Career, Net Worth, Body Measurements, Relationships, Social Media, and more about Slade Smiley, Carvin Winans, Nick Cordero, and more.