Meredith Marakovits is an American sports broadcast, popular for her reports for New York Yankees for the YES Network. She is not married and doesn't have kids.

Meredith Marakovits is very private and secretive in real life. Despite her popularity, she has managed to keep her personal information away from the media. Therefore, information regarding her dating life is not known.

According to various sources, she is not married and doesn’t have kids. 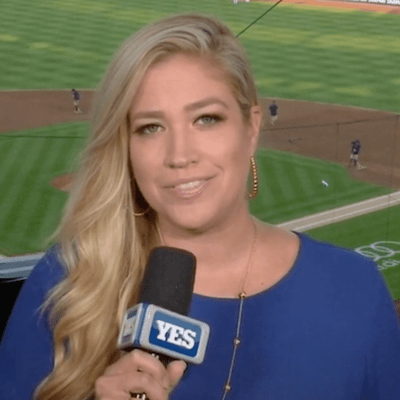 Who is Meredith Marakovits?

Meredith Marakovits is an American sports broadcast, popular for her reports for New York Yankees for the YES Network.

She reports on the team within the network’s Yankees game telecasts, per-game and post-game show, and the Yankees Batting Practice Today show.

Meredith was born on 22nd July 1983. She was born in Walnutport, Pennsylvania to Dan and Sara Marakovits. Dan was a very good basketball player for many years and even coached several high school teams. It was because of him, that Meredith got interested in sports, in the first place. Meredith grew up alongside her two brothers.

After finishing primary school, she moved to Allentown to attend Central Catholic High School. She was an outstanding volleyball player and managed to win a sports scholarship provided by La Salle University, to subsequently play volleyball at the NCAA Division Level I in Philadelphia. Meredith graduated from the university in 2005 with a BA in marketing and communication. She enjoyed playing sports, however, she was more interested in broadcasting.

After graduating, Marakovits decided to pursue a career in reporting. As she had a great interest in sports, she decided to get into the sports reporting field. Therefore, she started hosting pre-game and post-game shows for the Lehigh Valley IronPigs. She then went on to be a sideline reporter for Service Electric’s 2 Sports Division, for which she started sports casing college football, indoor football as well as college basketball.

Marakovits succeeded Kim Jones as the clubhouse reporter for the YES Network at the start of the 2012 season.

As of 2022, Marakovits has an estimated net worth of around $2 million. Similarly, her annual salary as a clubhouse reporter for New York Yankees is around $48 thousand.

Marakovits is 5 feet 11 inches tall and weighs around 64 kg. Marakovits has a beautiful pair of blue eyes and blonde hair. Besides that, she wears 8.5 shoe size and her body measurement is 33-25-36 inches.