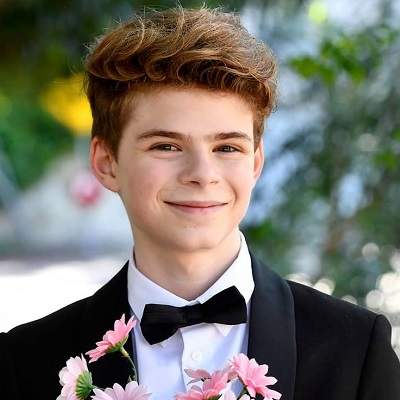 Merrick Hanna’s current relationship status is possibly single. To date, he has not introduced anybody as his lover or girlfriend.

Also, he has not shared any details on his previous relationship and dating history. As of now, he is focused on his career as an actor and dancer.

Who is Merrick Hanna?

American Merrick Hanna is a dancer and actor. Hanna is renowned as Goth Boy Edward of Mani and Oliver of Winston.

Last, in 2020, he made his appearance in the movie, Alienated as Teen David Bennett.

Next, he will be making his appearance in the movie, A Genie’s Tail as Oliver. Currently, the movie is in post-production.

Merrick Hanna was born on 22nd March 2005 in Encinitas, San Diego, California, United States. He is of Irish ethnicity.

He is the eldest son of his parents; Shawn (father) and Aletha Hanna (mother). He has a younger brother, Sagan. Details on his academics are not available. Possibly, he is attending the Middle School.

Prior to that, he made his appearance in series like Ellen: The Ellen DeGeneres Show, So You Think You Can Dance, and Das Supertalent.

In the year 2017, he made his acting debut with the TV series, Totally TV as a guest star. Following that, he made his appearance in the shorts; Star Audition, Just Dough, and Team Kaylie. The following year, he hosted the dance squad, Fox Family Entertainment Dance Squad. A

In the movie 2019, he made his appearance in the web series, Mani. The movie became one of the milestones in his acting career. Last, in 2020, he appeared in the 2nd season of the series, Mani.

He has dark brown eyes with auburn hair. He stands at a height of 5 feet and 5 inches and weighs around 60 kg.

To date, he has not been involved in any type of scandal and controversy that created a buzz in the media. Besides that, he has managed to maintain distance from any type of rumors.

He is active on Instagram with the handle, merrickhanna with 897k followers.

On Instagram, he is following the personalities like Sky Brown, Nick Kosir, and Lauren Gottlieb. Also, he has 5.4 million followers with 87.9 million likes.