Skip to content
Married Biography
Married Biography / Entertainment / Mia Khalifa Found The Love Of Her Life On A Swedish Chef Despite Her Past; She Auctioned Her Glasses To Help The Lebanon Blast Victim!

Mia Khalifa Found The Love Of Her Life On A Swedish Chef Despite Her Past; She Auctioned Her Glasses To Help The Lebanon Blast Victim! 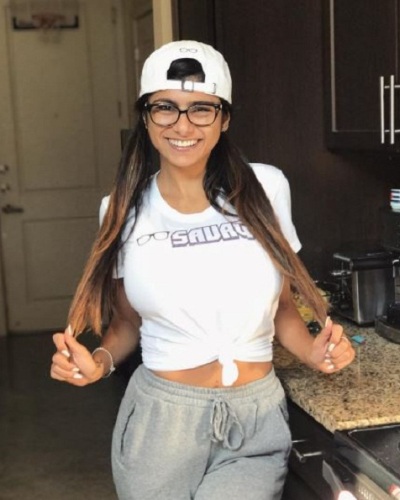 Here is the complete journey of the couple together.

In March 2019, Khalifa announced she got engaged to her fiance, Robert Sandberg, a Swedish chef. Back in 2018, Khalifa followed the chef on Instagram when he used to work with a prestigious restaurant.

Furthermore, the sports commentator revealed, the chef did not know about her past job when they first met.

The chef Dm’ed her after she followed him on Instagram and it was an immediate hit for them. After almost a year of dating, the chef finally proposed her in 2019 during their trip to Chicago.

In addition, she stated that it was a complete surprise for her as she did not saw that coming. The couple read their vows on their own kitchen counter and officially turned husband and wife.

The chef posted a photo of him with Khalifa on his Instagram explaining how he took their relationship to the next step.

“The ring was hidden in a bowl of dried ingredients and came out as a “new serving”. Mia was to curious and to eager to taste so she started to eat the inedible ingredients. I told her not do it and then I put the ring on the finger.”

However, the comments and the internet due to her past have some effects on their relationship.

The sports commentator revealed that the couple goes to the therapy together to deal with the hate they get online.

He also openly supports his wife making sure his mental health and relationship are doing fine.

You may also read- Farrah Abraham still not in amicable relation with co-stars of Teen Mom OG!

Khalifa auctioned her glasses for a good cause

The former adult film actress went a step ahead to support the Lebanon bomb-blast victims. She kept her infamous glasses she wore while working on the adult industry for auction on e-bay. Khalifa announced she has kept her glasses on e-bay to raise funds to help Lebanon at the time of crisis.

The glasses are currently at the bid of  US $100,000 on e-bay according to the recent data. She will be donating all the money on Red cross which will benefit all the victims of the explosion rattled the capital city on Lebanon. Khalifa wore the glasses on the adult videos during her three months of a short period in the adult industry.

You may also read- Ex-adult star Mia Khalifa suffered a ruptured breast implant when hit by an ice hockey puck!