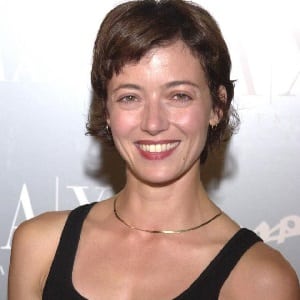 Mia Sara was previously married to English actor and director, Jason Connery. The pair met during the making of ‘Bullet to Beijing’ in Russia. They later married on 17 March 1996. They have a son named Dashiell Quinn Connery. The couple divorced in 2002.

Currently, Mia is married to producer and actor Brian Henson. The pair married on 6 April 2010. They have a daughter together: Amelia Jane Henson. Their marriage is going strong as there is no news regarding any extramarital affairs at present.

Who is Mia Sara?

Mia Sara is an American actress. People mostly know her for her role as Sloane Peterson in the 1986 comedy film ‘Ferris Bueller’s Day Off.’ Additionally, she has also appeared in other movies like ‘Legend’ and ‘Timecop.’

Sara was born in Brooklyn Heights, New York City, New York as Mia Sarapochiello on June 19, 1967. She was born to parents Diana and Jerome Sarapochiello. Her father is a photographer and artist and her mother is a stylist and photographer. She became interested in the world of acting since her childhood years. She is of American nationality. Furthermore, she belongs to the Italian ethnic background.

Sara initially appeared in the movie ‘Legend’ as Lili. Additionally, she also had the role of Sloane Peterson in the movie ‘Ferris Bueller’s Day Off.’ In 1987, Sara had the role as Queenie Kelly / Dawn Avalon in the TV series ‘Queenie.’ Since then, she has appeared in numerous other movies and television series. All in all, she has over 40 credits as an actress.

Some other movies and television series that Sara has appeared in are ‘Dorothy and the Witches of Oz’, ‘The Witches of Oz’, ‘Tinseltown’, ‘Nightmares & Dreamscapes: From the Stories of Stephen King’, ‘CSI: NY’, ‘Hoodlum & Son’, ‘Birds of Prey’, ‘Lost in Oz’, ‘Turn of Faith’, ‘Jack and the Beanstalk: The Real Story’, ‘The Incredible Elephant’, ‘Dazzle’, ‘Hard Time’, ‘20,000 Leagues Under the Sea’, ‘Strangers’, ‘Undertow’, ‘Midnight in Saint Petersburg’, ‘Chicago Hope’, ‘Black Day Blue Night’, ‘The Pompatus of Love’, ‘The Set Up’, ‘The Maddening’, ‘Bullet to Beijing’, ‘Caroline at Midnight’, ‘Time Trax’, ‘Blindsided’, ‘Call of the Wild’, ‘A Stranger Among Us’, ‘By the Sword’, ‘A Climate for Killing’, ‘Any Man’s Death’, ‘Daughter of Darkness’, ‘Till We Meet Again’, and ‘Shadows in the Storm’ among others.

Sara won the Saturn Award in 1995 for her performance in ‘Timecop’ in the category of Best Supporting Actress.

Sara has not revealed her current salary. However, she has an estimated net worth of around $ 1.5 million at present.

Sara’s divorce with Jason Connery was controversial. Jason made the news after he commented that Mia will not get a penny from him after the divorce. Additionally, this led to the speculations that they had a difficult relationship. At present, there are no rumors concerning Sara and her career.

Talking about her body measurement, Sara has a height of 5 feet 4 inches (1.63 m). Additionally, she weighs around 52 kg. She has a body measurement of 30-23-33 inches. Furthermore, her hair color and eye color is dark brown.