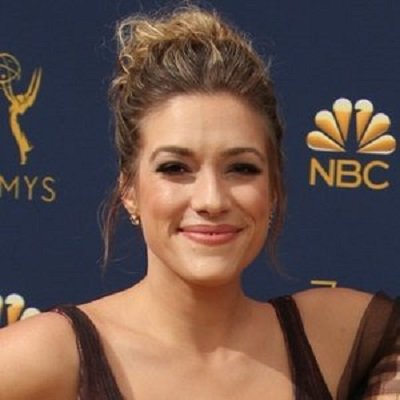 Mia Swier is married to her long-term boyfriend, Darren Criss. Darren is an actor by profession.

The wedding took place on the 16th of February 2019 at the Sculpture Graden at New Orleans Museum of Arts. Moving forwards, the reception took place at the Ace Hotel.

At the wedding, she wore a bridal gown designed by Vera Wang. Her wedding was attended by the stars including Lea Michele, Chord Overstreet, Harry Shum Jr, and John Stamos.

Who is Mia Swier?

American Mia Swier is the founder and director of Von Glitx Production. She is renowned as producer and writer of the Fox Networks.

Last, in 2013, she appeared in the short, Running on Empty. She is also a musician.

Recently, Mia and Darren caught the eye of the world when they held a unique premiere party for Netflix series, Hollywood. The mini-series was last released on Netflix on the 1st of May 2020.

Due to the COVID-19, they had a unique premiere party where Mia and Darren took drone shots in the middle of the empty street of Hollywood.

At the event, Darren was dressed in a black tux with a pair of white sneakers with a white mask. Accompanying him, Mia wore a white floral full-length print dress with a pink shawl and white mask.

Mia Swier was born as Mia Elan Swier on the 1st of September in 1985 in Alabama, United States. Her father Laszlo Von Glitz used to be a painter by profession.

She is of British-Irish ethnicity. Till the date, she has not disclosed any info about her mother.

Mia Swier started her journey in the entertainment world back in 2005 as a production intern for ABC Television.

After that, in 2004, she joined White Cherry Entertainment as a production Assistant. For the company, she was part of the projects including Superbowl, Daytime Emmy, and NFL Kickoff. However, she left the organization in 2006.

In 2006, she joined USA Networks as Nashville Star Production Assistant. However, she left the organization in less than a year.

In 2009, she joined Showtime Network Inc. as associate producer. As a producer, director, and editor, she worked in the short, A (Not So) Civil Union for the Network. Leaving the company in 2012, she joined the Fox Broadcasting company as writer and producer.

The same year, she founded the company, Von Glitx Productions. Later, she also became the director of the production house.

Besides that, she is also a freelance director, producer, and writer too.

Through her career, she has made a net worth of $1 million. Her earnings as director of the Von Glitx Production are in the range of $67k – $187k.

Besides that, she also earns as a freelance writer and producer which depends upon the projects.

Till the date, she has not been through any kind of controversy that created a buzz in the media. Similarly, there are no rumors.

Mia Swier is a brown-eyed brunette. Her height is 5 feet 6 inches and weighs around 65 kg. Her body measurement is 34-24-35 inches.

Darren Criss took over social media with Nude Pic! Explains-‘Everyone Gets to Do One’!! Check out his Lifestyle, Career and Relationship!