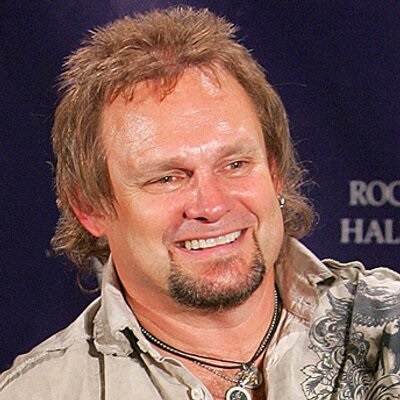 The original sin is not that we are inherently flawed, born sinners, or imperfect

the original sin is that we do not recognize, realize that each of us is born perfect, exactly as the universe, God intended us to be. We are all perfect. The universe is perfect. Stop struggling against yourself. Accept that you are perfect. When you do, your highest self will shine through.

What is the relationship of Michael Anthony?

Michael Anthony is married to Susan Hendry. The wedding took place on the 21st of February 1981. The couple happens to be high school love birds.

Later, in 1985, they completed their family with a daughter, Elisha. Seven years later, in 1992, the couple brought a sister for Elisha. They named her Taylor.

As of now, he is living a happy life with his family in Newport Beach, California.

Who is Michael Anthony?

Michael Anthony is a musician and businessman. Anthony is renowned as the founding member of the rock supergroup, Chickenfoot.

Also, he is the back vocalist of the group.

He was born on the 20th of June 1954 in Chicago, Illinois. His birth name is Michael Anthony Sobolewski.

His father, Walter Sobolewski is of Polish ethnicity. However, he hasn’t revealed his mother’s name.

As he was in his teens, he had a keen interest in playing Guitar. At the time, his father gifted him a Victoria a copy of a Fender Precision Bass along with a Gibson amplifier. That inspired him to pursue music. Later, he started playing for the music bands that include Poverty’s Children, Black Opal, and Snake.

During high school, he met the musician, Eddie Van Halen. Eventually, he started playing with his band, Van Halen.

– In 1977, with the band, Van Halen, Michael Anthony signed with Warner Bros. Under the same recording label, they released their self-titled album on the 8th of February 1978.

– Along with the band, he released around ten albums till 1995 including one live album.

– In 2003, he made a one-year tour with the name, Van Halen reunion in the reduced royalty contract.

– Since 1996, there was a rumor that he had been fired from the band. However, he was officially replaced on the 8th of September 2006 by Wolfgang.

– In 2008, he formed a supergroup, Chickenfoot along with his ex-band member, Sammy Hagar, Chad Smith, and Joe Satriani.

– In 2009, the band released a self-titled debut album that peaked at the position of 88 on the yearly chart the billboard. Also, the album earned Gold Certification through RIAA and Music Canada.

– In 2014, he formed the band, The Circle along with Sammy Hagar, Vic Johnson, and Jason Bonham.

– Apart from music, he also owns a food network business. His products include hot sauce, BBO sauce, and hot mustard.

As he was cast out from the rock band, Van Halen. He had not been on the speaking terms with the ex-band members. However, in 2019, there were rumors that the bassist is joining the band, Van Halen for a stadium tour.

Later, he put the rumors into the silence appearing on Premiere Radio Networks. At the time, he told that he has not spoken to any members of the band since 2004. However, he mentioned that a few years back, he had made small talk with Alex Van Halen when they ran out together.

Michael Anthony has brown eyes with light brown hair. His height is 5 feet 8 inches and weighs around 64 kg.

Also, he shares a YouTube channel, iChickenfoot along with Sammy Hagar, Chad Smith, and Joe Satriani.