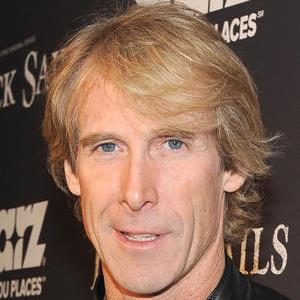 I love it when people get really mean and call you a 'hack'. It's like, don't they see how well these movies are doing? They make an impression around the world. I met this guy in Bali who lives in a hut with a TV, and he loved The Rock (1996). That means something, doesn't it?

Lots of sci-fi movies are much ado about nothing. What I liked about [The Island (2005)] is that it's a universal thing: we all want to live longer. But how selfish would you be to achieve that? You could get a liver, a heart, kidneys, essential things. But I wanted to show people going for things that were just so crass, like fresh skin for a face-lift. For some woman who doesn't want to go through the pain of childbirth and have stretch marks, why not have your clone birth for you? How disgusting is that?

Michael Bay has been associated with Playboy model Jaime Bergman, and Cara Michelle.

He is currently possibly single.

Who is Michael Bay?

Michael Bay is an American filmmaker. He is also well known for directing and producing big-budget, high-concept action films characterized by fast cutting, stylistic visuals, and extensive use of special effects, including frequent depictions of explosions.

Michael Bay was born in Los Angeles, California, in the United States on February 17, 1965. His birth name is Michael Benjamin Bay and he is currently 55 years old.

His father’s name is Jimmy Bay and his mother’s name is Harriet Bay who adopted Michael. Additionally, as a boy, he has also attached some firecrackers to a toy train and filmed the ensuing fiery disaster with his mother’s 8-millimeter camera.

He has a sibling namely, Lisa Bay. Michael holds American citizenship and Jewish ethnicity. His birth sign is Aquarius.

Talking about Michael’s education history, he attended the exclusive Crossroads School, in Santa Monica, California. Then, he graduated from Wesleyan University in 1986, majoring in English and Film.

He attended Art Center College of Design in Pasadena for his graduate work.

Whereas, his first movie was “Bad Boys” in 1994, produced by Jerry Bruckheimer and Don Simpson starring Will Smith and Martin Lawrence. Additionally, his second movie was “The Rock” – an action movie starring Sean Connery, Nicolas Cage, and Ed Harris. In the year 2001, Bay-directed “Pearl Harbor” and co-produced it with Jerry Bruckheimer. Whereas, it starred Ben Affleck, Josh Hartnett, Kate Beckinsale, and Cuba Gooding, Jr.

In the year 2005, Bay produced and directed “The Island”, a science-fiction film starring Ewan McGregor and Scarlett Johansson.

Bay was a director and executive producer of “Transformers: Revenge of the Fallen” released in 2009. In spite of negative reviews by critics. Platinum Dunes produced remakes of classic horror films and introduced new directors like Sam Bayer and Marcus Nispel.

Bay-directed “Transformers: Dark of the Moon” (2011). His next film “Pain & Gain” was a true crime story concerning a group of bodybuilders working together to commit a robbery. He produced “I Am Number Four”, based on a series of novels by Pittacus Lore.

Bay has received five MTV Movie Awards: Best Movie and Best Summer Movie You Haven’t Seen Yet for “Transformers” and Best Action Sequence for “Pearl Harbor”, “Bad Boys II” and “The Rock”. His commercials have won him major awards including Cannes’ Golden Lion and the Grand Prix Clio.

In 1994, Bay received an award for Outstanding Directorial Achievement in Commercials from the Directors Guild of America. Bay also received the ShoWest 2009 Vanguard Award for excellence in filmmaking.

He has an estimated net worth of around $430 million (as per 2020 data) and he has earned that sum of money from his professional career.

He also owns a luxurious car Gulfstream G550 jet worth about $50 million.

Michael Bay has a height of 6 feet 1 inch. Additionally, his weight is unknown. He has brown hair and hazel eyes. Furthermore, his dress size is 4 (US) and his shoe size is 8 (US).

English singer-songwriter and guitarist-James Michael Bay with a successful music career. Also a supporter for the international non-profit!