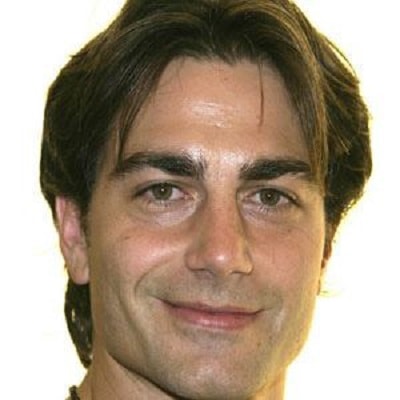 I too have my own demons, and I have struggled. I've made my own mistakes, and I'm not proud of them.

The fact is, my parents loved me, and I wanted to be worthy of their love. I wanted to make them proud.

Michael Bergin is a married man. He has been married to his long-term girlfriend, Joy Tilk (makeup artist) in the year 2004. They began dating in February 1999 and tied their knot in 2004 at a private wedding. There are no rumors of divorce or separation between them.

The couple welcomed a son Jesse Bergin and a daughter Alannah Jade Bergin. As of now, the family of four are living a happy life together.

Previously, he was a serious relationship with Carolyn Bessette-Kennedy who was a former publicist for Calvin Klein. Unfortunately, she died on 16th July 1999 in a fatal plane crash and he was arrested for driving drunk on the fifth anniversary of his ex-girlfriend’s death in 2004.

Also, he dated television actress, Stacy Kamano who is best known for her role on Baywatch Hawaii. Later, they also separated for an unknown reason.

Who is Michael Bergin?

Michael Bergin is an American actor and model who is considered as the world’s first male supermodel to have appeared in campaigns for designers such as Yves Saint Laurent, Sonia Rykiel, Calvin Klein, and Giorgio Armani.

He was born on 18th March 1969, in Waterbury, Connecticut, the United States of America. His birth name is Michael John Bergin and his horoscope is Pisces. He was born to Michael Bergin (father) and Mary Hill (mother). He has not provided information about his siblings and childhood.

Michael holds American citizenship but his ethnicity is unknown.

He attended the University of Connecticut in Storrs, Connecticut, for his education.

He worked as the main model for the huge brand, Calvin Klein and the product he endorsed and modeled for was Calvin Klein’s racy series of black and white underwear. Later he replaced Mark Wahlberg and featured in ads in New York City’s Times Square.

Michael has other huge brands such as Giorgio Armani, Donna Karan, Valentino, and Yves Saint Laurent and has appeared in commercials for Bacardi Rum and Coty, Kellogg’s, Bacardi Rum, L’Oréal, Maybelline, Perry Ellis, as well as Liz Claiborne.

In addition, Michael Bergin is also active on TV series. He portrayed the character of J.D. Darius on an American action drama series, ‘Baywatch’ and later ‘Baywatch: Hawaii’ for 88 episodes from the year 1997 to 2001.

Further, he appeared on VH1’s sci-fi celeb reality show ‘Celebrity Paranormal Project’ I 2006 and also launched his own brand of men’s underwear.

It seems Michael has not been awarded and nominated for his work till date.

He has an estimated net worth of $1 million around and he has earned that sum of money from his professional career.

Michael has been successful in keeping himself far from rumors and controversies in his personal and professional life.

Michael Bergin has a height of 6 ft. 2 inches and weighs 82 kg. He has brown eyes, brown hair, and fair skin tone.