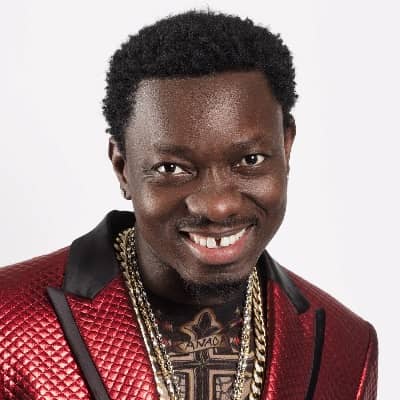 What is the relationship of Michael Blackson?

On July 22, 2021, Michael Blackson proposed to his girlfriend, Miss Rada, during a radio interview on The Breakfast Club. They appeared in the reality series, Couples Retreat’s first season.

The couple lives a lavish and romantic life. They seem to be very happy and comfortable with each other. They are planning for their marriage.

Who is Michael Blackson?

Michael Blackson is an American-Ghanian-Liberian actor and comedian who is best known for tv series like ‘Are We There Yet?, ‘Wild ‘N Out’, and ‘Rich Africans’. Furthermore, he is also popular as the African King of Comedy.

What are the birth facts of Michael Blackson?

Michael Blackson was born on November 28, 1972, in Nsaba, Ghana. His real name is Jafari Ferguson

His Ghanaian father worked in a theatre company and his Liberian mother worked in a secondary school. However, he has not mentioned the name of his parents yet. He has spent his childhood in different places like Monrovia, Ghana, Newark, New Jersey, and finally Philadelphia, Pennsylvania. He was a talented person since his childhood. Similarly, he has not given details about siblings if any.

He is of Ghanaian nationality and of half Ghanaian and half Liberian ethnicity. Michael is at least a high school graduate.

Michel Blackson started doing comedy after his coworker at Domino’s advised him to start an open mic. Later, he started his acting career in the tv series, Snaps. In 2000, he made his film debut in Next Friday and also appeared in the tv series, ComicView.

Later, he played various roles in TV films making such as The Savages, The Mail Man, My American Nurse 2, In Sickness and in Health, The Bill Collector, The Substitute, Nobody’s Fool, I Got The Hook Up 2, and his latest film, The House Next Door: Meet the Blacks 2.

However, his career in big screen flying starts with his appearance in the tv series, Are We There Yet?. Later he has done a wide range of tv series and shows including Walter Latham’s Comedy After Dark, Blackson’s Basemen, Leave It to Stevie, Wild ‘N Out, Hip Hop Squares, Rich Africans, and Casting One Mo’ Chance.

Michael has not won any awards yet. However, On February 11, 2018, he hosted the ‘BET Social Awards.’

Of all his numerous films and movies, he has made a good fortune for himself. He has an estimated net worth of around $3M as of 2022. Moreover, he is planning to build a high school in Ghana.

Michael has maintained a clean profile.

How tall is Michael Blackson?

Blackson stands  6 feet 1 inch tall and weighs around 65 kg. Furthermore, he has black hair and black color eye. Besides these, there is no information on his other body stats.