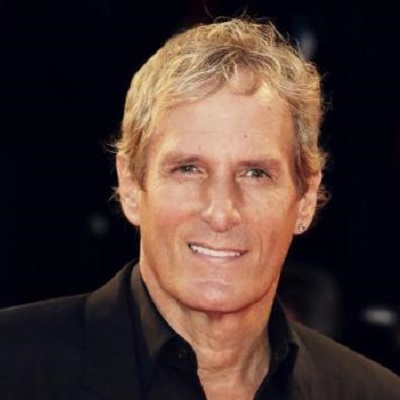 I've been all about humor and all about laughing since I was a kid. That's just who I am. I've been kicked out of every class. Andy [Samberg] and I were talking about that. Neither one of us had our Bar Mitzvah because we couldn't take Hebrew school seriously.

Previously, the singer was married to Maureen McGuire. They married in 1975. However, they parted away after 15 years of long married life in 1990. Together, they have three children, Isa, Holly, and Taryn, who are two years elder from each other.

They are also grandparents of six grandchildren. Their first grandchild was born in October 2010.

11 years after his divorce, the singer was engaged with the actress Nicollette Sheridan in March 2006. They were first introduced by jazz saxophonist Kenny G. After that, they started dating each other in 1995 and reunite in 2005. In the time interval, they even have one breakup too.

Eventually, the singer and actress broke their engagement after two years in August 2008.

Who is Michael Bolton?

American Michael Bolton is a two-times Grammy award-winning singer and songwriter. He is renown as the frontman of the American band Blackjack.

Next, on the 24th of January, he will be appearing at Hard Rock Tampa in Florida.

Michael Bolton was born on the 26th of February 1953 in New Haven, Connecticut, the U.S. His parents George Bolotin, father and Helen Bolotin, mother are of Russian ancestry. His grandparents are immigrants from Russia.

He has two siblings, Orrin and Sandra.

-In 1975, he started his career as a singer with the self-titled album Michael Bolotin. During the time, he was associated with the American band, Hard Rock. Later, in 1979, he formed his own band, Blackjack along with members like Bruce Kulick, Sandy Gennaro, and Jimmy Haslip.

-In 1982, he collaborated along with the songwriter Doug James and the wrote song, How Am I Supposed to Live Without You for American singer, Laura Branigan. The song peaked at rank #1 in US Billboard turned out to be one of the milestones of his life. For the song, he received Grammy Award too.

– On the 23rd of 1993, he released the album, Time, Love & Tenderness under the recording label, Columbia. The album also peaked at the rank of #1 US Billboard. The album received 7x platinum certification from Music Canada and 8x platinum from RIAA.

– As a singer, he has performed with Lucia Aliberti, Patti LaBelle, José Carreras, Tony Cetinski, Ray Charles, Celine Dion, and Plácido Domingo. As a songwriter, he has collaborated with many other artists as well.

In 2018, he announced that he is visiting Birmingham, England for his tour performance.

-Bolton has appeared in many movies and TV shows in cameos roles like Meet Wally Sparks and The Nanny. He was also featured in Celebrity Duets along with Lucy Lawless on Fox Network. He also appeared in the dancing show, Dancing with the Stars as a contestant.

Bolton was sued by the American group the Isley Brothers. The group claimed that Love Is a Wonderful Thing was plagiarized with their song. The Jury decided in favor of Isley Brothers with the compensation of $5 million US for the group.

Based on the decision Sony Music paid $4.2 million US, Michael paid $932k, Goldmark paid $220k and the remaining amount was paid by the production house of Michael and Goldmark.

Bolton has an estimated net worth of $60 Million US. Based on his experience, his salary as a hip-pop singer is in a range of $21k-$207k US. As a songwriter, his earnings are $63k US.

Apart from that, he also earns through his concerts and tours.

He has brown eyes with auburn hair. His height is 5 feet and 10 inches.

He also has a self-titled YouTube channel with 813k subscribers and 567 million views.