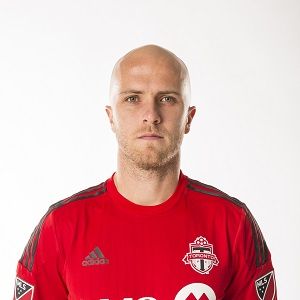 I feel so attached to the city of Toronto, the club, the team. I love it here and I am really proud of what we've been able to do over the past six years it's always tricky when you have one team who has advanced and another team playing for everything, at the end of the day we'll take our points and move on.

What is the relationship of Michael Bradley?

Michael Bradley is married to Amanda Barletta back in 2011. His wife, Amanda is a former tennis player.

Furthermore, they have already welcomed two children a son and a daughter.

He has a son Luca Bradley born on September 30, 2012, and a daughter Quinn Elle Bradley on November 17, 2014. They are spending precious time together with a beautiful family and living happily.

Who is Michael Bradley?

Michael Bradley is a professional soccer player who represents the United States.

He also plays for the MLS-based franchise Toronto FC and captained for both club and the country.

Bradley is one of the highest-earning soccer players in Major League Soccer. Before coming to Toronto FC he played two seasons with Italian side Roma.

He was born to Bob Bradley and Lindsay Bradley on July 31, 1987, in Princeton, New Jersey, United States.

His father was the former manager of the English club Swansea City, who was also the coach of the United States men’s national soccer team.

Concerning his early life, Bradley grew up in Palatine, Illinois. Bradley had a keen interest in soccer from his childhood as he began to play soccer from a very early age.

Michael Bradley made his professional career debut at the age of 16 with the Major League Soccer franchise MetroStars.

At that time his father was coaching the team but was later fired from Metro Stars.

He scored his first goal against Chivas USA. Bradley switched to Dutch club Heerenveen as the youngest player for $250,000. He became a huge success for the Dutch side and managed to net sixteen league goals in the 2007-2008 season. Which was also the highest by any American player in the European first division competition.

His first goal came on November 15, 2008, against Bundesliga giant Bayern Munich. After playing two seasons with the club Bradley signed with Aston Villa on a loan on January 31, 2011.

His tenure at Aston Villa wasn’t successful so he moved to the Italian club Chievo on August 31, 2011. He netted his first goal on April 7 in a 3-2 victory.

After playing one season at Chievo, he joined Roma on a four-year deal transfer amounting to €3.75 million.

Furthermore, Bradley switched to Toronto FC for $10 million on January 9, 2014.

He made his debut in the opening match against Seattle Sounders FC on March 15, 2014, in which Jermain Defoe scored a brace. Now, he is captaining Toronto FC.

Concerning his International career, he had played in the United States U17 and U18 at a young age.

Bradley made his first appearance as a senior player on May 26, 2006, against Venezuela. He played magnificently as a central midfield in the 2010 FIFA World Cup.

Bradley captained his country first time against Brazil on August 10, 2010, in a friendly match.

Playing for many clubs in Europe as well as in the United States, Bradley has earned a handsome amount of money.

He is also earning a huge salary from his club. Currently, he has a net worth of $6.5 million.

Moreover, his salary as a soccer player is around $860k per year.

Bradley has achieved many honors and awards for his brilliant play.

In 2015 he was awarded U.S. Soccer Athlete of the Year and Fútbol de Primera Player of the Year.

In CONCACAF Gold Cup he received the Golden Ball Award for his superb performance.

Bradley has never been in controversy yet. But he has spoken about Donald Trump‘s action over the controversial Muslim ban in an interview.

Apart from that, there aren’t rumors regarding his professional and personal life.

Michael Bradley has an athletic height of 6 ft 2 inches and weighs 87 kg.

He has gorgeous green eyes and an attractive blonde beard. He is bald.