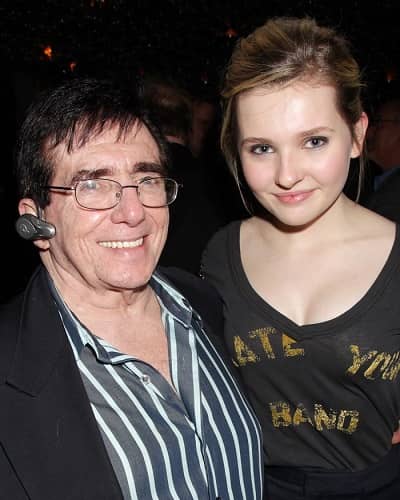 Abigail Breslin is heartbroken! Abigail lost her father Michael Breslin on 26th February 2021 at the age of 78 due to Covid-19 complications. She announced the death of her father through Instagram. She shared throwback pictures of Michael and wrote,

“my daddy…Oh wow. Hard to write this. Harder than I thought. I’m in shock and devastation. At 6:32 PM EST , my sweet, perfect, amazing, heroic, wonderful dada passed away after my family and I said goodbye. It was COVID-19 that cut my sweet daddy’s life too short.”

Abigail Breslin said some sweet words about her dad who was a hilarious, boisterous, tenacious, rebellious, intelligent, sweet, and incredible human being.

In another post, she shared pictures of her and her dad where she thanked everyone who gave her and her family comfort with their messages. She wrote,

“I also wanted to take a moment and thank the incredible staff at Mount Sinai- Beth Israel for their truly amazing care over my father. They made an extremely difficult time exceedingly less painful with their attentiveness, kindness, and understanding as well as their best efforts to save my dad. I couldn’t be more grateful.”

Abigail could not stress more how much she misses her dad who expired suddenly due to the Novel virus. Likewise, she also opened up about her father’s covid-19 diagnosis.

Also read Fort Hood soldier Elder Fernandes’ body discovered 30 miles away from the military base! The mysterious disappearances and deaths of the soldiers!

How much is the net worth of Abigail Breslin in 2021?

Abigail Breslin has a net worth of $8 million as per Celebrity Net Worth. Abigail has worked in films and TV series like Dirty Dancing, Scream Queens, Fairfax, Zombieland: Double Tap, Freak Show, Final Girl, Maggie, August: Osage County, The Call, Zombieland, My Sister’s Keeper, Raising Helen, and many more.

On 11th October 2011, Abigail released an album titled Janie Jones. The album consists of singles like Fight For Me, Christmas In New York, You Suck, Sleepwalking, and 90’s Honey. In 2011, she lived in the same apartment that she grew up in with her family in Manhattan. She said,

“When I’m not filming, I come home and I have to dump the trash, feed the dogs, take the dogs out, clean my room. My family and friends are all very supportive of what I do. But they don’t think it’s that cool.”

Also read Abigail Breslin talks about the major social problem in our society; Takes social media to share her words about post-traumatic stress disorder and her relationship

Abigail Breslin is an American actress and singer. She is extremely prominent for the film ‘Little Miss Sunshine’ for which she won 6 awards and was nominated for other 10 awards. She has made a respectable position in the American film and music industry and has earned more fame and fans. Read more bio…