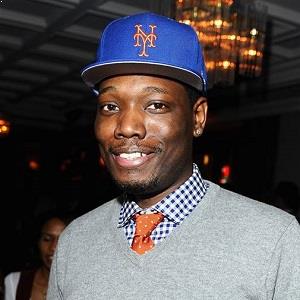 Although a famous personality, Michael Che has successfully kept his personal life a secret from the rest of the world. At present, there are no records of his past and present relationships. He is currently believed to be single.

Who is Michael Che?

Michael Che is an American stand-up comedian, actor, and writer. People mostly know him for his work on ‘Saturday Night Live’. He co-anchors on ‘Weekend Update’ and he is also the co-head writer.

Michael Che was born in Manhattan, New York City, New York on May 19, 1983, to parents Rose and Nathaniel Campbell. He is the youngest of seven children. Throughout most of his childhood years, he grew up on the Lower East Side of Manhattan. He is of American nationality. Furthermore, he belongs to African-American ethnic background.

Talking about his education, Che graduated from the Fiorello H. LaGuardia High School of Music & Art and Performing Arts.

Michael Che initially began his stand-up career in 2009. He appeared on the ‘Late Show with David Letterman’ in 2012. He got his big break after he joined ‘Saturday Night Live’ as a writer in 2013. Previously, he was the winner of New York’s Funniest Stand-Up Competition and was named one of ‘10 Comics to Watch’ by Variety in 2013. Previously, he also worked as a designer for Tommy Hilfiger.

Furthermore, Che took over Cecily Strong as the ‘Weekend Update’ anchor on September 11, 2014. Furthermore, he has also worked as a writer for ‘Detroiters’, ‘Saturday Night Live: Weekend Update Thursday’, and ‘Michael Che Matters’. Additionally, as an actor, he has worked on ‘Lucas Bros Moving Co’, ‘Top Five’, ‘Lyle’, ‘Teachers Lounge’, and ‘Just for Laughs: All-Access’ among others. He also has one credit as a producer.

Che has not revealed his current salary. However, he has an estimated net worth of around $ 1 million at present.

Che became part of a controversy after he was accused of being rude to Leah McSweeney whom he met online through a dating app. She said he was really arrogant during the meeting. He has also been involved in several political controversies indirectly through ‘SNL. At present, there are no rumors concerning Che’s life and career.

Talking about his body measurement, Che has a height of 6 feet 1½ inches (1.87 m). Additionally, his hair color and eye color is black.

Michael Che is active on Instagram. He has over 394k followers and has posted just 5 times till date. However, he is not active on Twitter and Facebook.