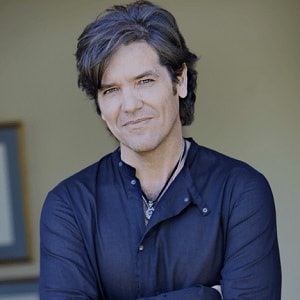 “Her smile, and her beauty and energy. She was shy when I first met her. She's staring at me right now. She's leaving the room now because I kicked her out. Actually, I met her at a telethon in Utah for the Children's Miracle Network. She was there with her dad, which I didn't know was her dad at the time, James Best, who is Rosco from The Dukes of Hazzard (1979). I thought it was her boyfriend! Later, I found out from my brother that it was her dad. Yeah, I was like 'God, she's so pretty and sweet' and I got this really good feeling when I met her. I was actually in shock when she said she was a Solid Gold dancer because I thought she'd be like 'hey I'm really cool, I'm on TV all the time,' but she was very shy and soft-spoken.”

What is the relationship of Michael Damian?

Michael Damian has been married to Janeen Damian on June 18, 1998. The couple engaged in 1997. They do not have any children yet. They are currently living happily together without any rumors of divorce or an extra-marital affair.

Who is Michael Damian?

Michael Damian is an American actor, producer, and recording artist. He is best known for his role in the soap opera ‘The Young and the Restless’ as Danny Romalotti.

He was born on April 26, 1962, in San Diego, California, USA. His birth name is Michael Damian Weir and he is currently 60 years old.

He is a huge fan of Julie London since a young age, and he watched her on ‘Emerdency!’ in 1972. His best friend/acting mentor was Jeanne Cooper.

He has not mentioned his parents, siblings, and his childhood. He holds American citizenship but his ethnicity is unknown.

There is no information available about his school and college education. However, it is under review.

He started his music career as a member of his family band, ‘The Weirz’ and he released his two self-titled albums in 1975 and in 1979.

He then made his appearance on American Bandstand in a cover of the Eric Carmen tune ‘She Did It. Michael was given the opportunity to play the part of singer Danny Romalotti on the daytime television series ‘The Young and the Restless.

He played in the series for 12 years and he played the starring role of Joseph in the Broadway production of Andrew Lloyd Webber and Tim Rice’s musical, ‘Joseph and the Amazing Technicolor Dreamcoat’ in which the production set a single-day box-office record.

Michael has released five albums with eight top 40 hits which include his number one cover of the David Essex song ‘Rock On’, which was certified gold in 1989. For his ‘Was It Nothing at All’, he won a BMI Song-Writing Award.

He debuted his film directional with an indie comedy ‘Hot Tamale’ which he wrote with his wife Janeen. Some of the films he directed are ‘Moondance Alexander’, ‘Flicka 2’, ‘Marley & Me: The Puppy Years’, ‘Flicka: Country Pride’, and ‘A Princess for Christmas’.

He directed and co-wrote with his wife a romantic comedy ‘The Sweeter Side of Life’ in 2012 and the film premiered on the Hallmark Channel on January 19, 2012.

His theatre works include ‘Venture Country Youth Experimental Theatre’ in 1971/1973 and ‘Joseph and the Amazing Technicolor Dreamcoat’ as Joseph in 1993/1994.

As of 2022, It is estimated that he has a net worth of around $3 million. His main source of income is his professional career.

He loves to keep his lips tight and wants to be more secretive. So, he has not been involved in any rumors and controversies in his private and professional life.

He has a height of 6 ft. He has light grey hair and blue eyes. Information about his weight, dress size, shoe size, etc. is not available.