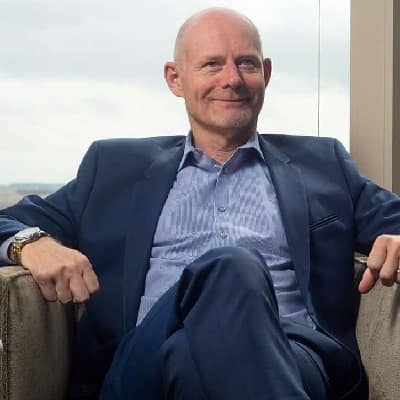 What is the relationship of Michael Darby?

Michael Darby and Ashley Darby met each other at a bar while working there. In college, Ashley was a bartender at D.C.’s L2 Lounge co-owned by Michael. Ashley saw Michael on the security monitor and eventually, they began dating.

He went on a trip to New York with Ashley and proposed to her on a helicopter ride over the Hudson in 2012. On May 15, 2014, the couple tied a lifelong knot that ended after Ashley recently confirmed her split from Michael on Tuesday, April 19, 2022, through an Instagram post, “It’s been almost 8 magical years.” The reason for their split seems to be Michael cheating on her. The lovebird welcomed their son Dean in July 2019 and Dylan in March 2021.

Previously, he was married to his first wife for two decades before divorcing in 2010. They also were blessed with two kids.

Who is Michael Darby?

Michael Darby is an Australian-American General Contractor and real estate agent. He is well-known as the ex-husband of the extremely popular television personality, Ashley Darby. Ashley is a star of The Real Housewives of Potomac.

Although his ex-wife has played a major role in his rise as a celebrity, Michael’s talent cannot be ignored.

There are no details regarding his parents, relatives, and siblings if any. Likewise, he hasn’t talked anything about his early life.

His nationality is Australian- American. Darby’s birth sign is Leo. Speaking of his education, he earned a degree in Construction Engineering and Business Development from the University of Melbourne.

Michael is a general contractor relating to his education. Also, he specializes in managing any project, fulfilling the conditions of a contract, and is a good leader.

Likewise, he is also a real estate agent who is the founder of Monumental Realty, a top real estate firm in Washington, D.C.

Moreover, he also owns the Australian restaurant Oz. Darby is a well-built businessman and also philanthropist. He has been active with the annual JDRF Real Estate Games event helping people suffering from type 1 diabetes. He also shows up at the Scope It Out 5K run/walk for colon cancer awareness shows.

Michael has also made an appearance on The Real Housewives of Potomac alongside Gizelle Bryant, Ashley Darby, and Robyn Dixon.

Darby is one of the largest real estate owners in Somalia. He has a 44-acre compound near the airport in Mogadishu. Therefore, he is estimated to have a net worth of about $20 Million.

Recently, the lovable couple made their separate ways and it has surfaced as a hot topic on several websites. The rumor has it that Michael was found dating another girl.

Moreover, he was previously charged with sexual assault after he grabbed a cameraman’s butt while filming The Real Housewives of Potomac. For his behavior, he was rumored to be gay but denied it.

Darby stands tall at a height of 6 feet 0 inches and weighs around 79 kg. Moreover, he prefers a clean shaved head and has blue eyes.

Michael is quite active on different social media platforms. His Instagram account has earned over 132K. His TikTok account has gained over 618.8K followers and over 8.1 million likes. Similarly, he is also active on Twitter with more than 2K followers.