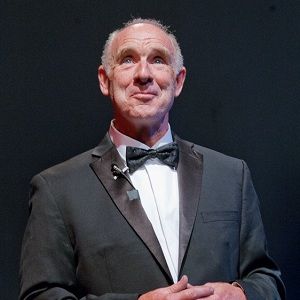 Michael’s relationship status is not available and not found through any sources. He may be single or in a relationship but there is no information on his girlfriend or love life.

Being a magician, he might be he likes to keep his personal life mystery.

Who is Michael Davis?

Michael Davis, who appeared on NBC’s ‘Saturday Night Live’ six times is an American Juggler and he is the only professional juggler to juggle on the show. He came to attention in the United States during the 1980s. He has performed for President Reagan, Queen Elizabeth, President George Bush, and many more. Currently, he is ahead writer. The act that made him famous includes tricks such as juggling a machete, an egg, an ax, etc.

Michael Davis was born on August 23, 1953. His birth name is Michael Bruce Davis. He was born in San Francisco, United States.

Michael was born to James Allen Davis, an English teacher, and Donna Ruth Brewer, a housewife.

Michael spent most of his childhood in San Francisco. He is American and speaks English. He lived a nomadic life as his parents used to move from one place to another and take him with them.

Michael attended ‘Monte Vista High School’ and graduated in 1971. He then started a six-week course at the ‘Ringling Bros and Barnum & Bailey Clown College’ on October 1, 1973.

Michael’s parents wanted the best for him. So, he traveled to most of the places in his childhood. After his graduation, he started a six-week course at the ‘Ringing Bros and Barnum & Bailey Clown College’ where over 3500 applicants were divided down to a group of 38 men and 7 women ranging between the age of 17-35.

From the competition, the selected candidates were offered a contract in a circus, and Michael got chosen. From the beginning, he always wanted to avoid any kind of labor work and wanted to become a poet. When he left high school, he rented a house for $30 a month at the age of 19.

In 1979, Davis performed on HBO’s ‘The Young Comedian’s Show’, which was his first major appearance on television. Davis also performed in the opening and closing night of the Broadway musical, ‘Broadway Follies’. Although the musical was a flop, he was hired immediately and performed in the Broadway Musical, ‘Sugar Babies’.

He bought a typewriter so that he could write about his life but it was a problem. He has appeared multiple times on ‘Saturday Night Live’ and has performed for various presidents.

Though Michael Davis could not achieve any achievements, he won the school acting award when he was in high school.

Michael Davis: Salary and net worth

Michael’s salary and net worth are still under review.

Michael is not seen currently in performances so people have started questioning “What has happened to Michael?”  He is free from rumors and controversies.

Michael’s hair color is grey and the eye color is blue. His height and weight are not mentioned in any sources.

Michael has a fan page in social media buzz but he is not acting himself.