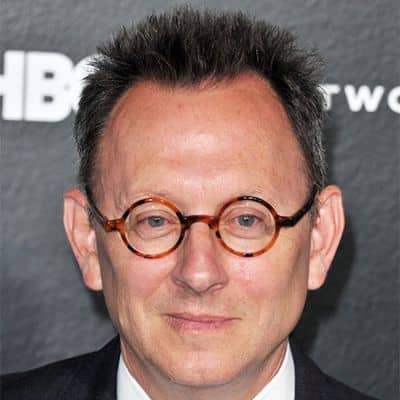 Talking about his relationship details, Michael Emerson is happily living a married life with Carrie Preston. Preston is a well-named American actress, director, and producer famed for her involvement in television series such as True Blood, The Good Wife, and Person of Interest.

The couple met for the first time in the mid-1990s and worked together in Hamlet. Later, they featured in several series such as Straight-Jacket, The Man Behind the Curtain, Lost, and so on. The love birds tied the knot on 5 September 1998.

They are together for more than 23 years old. However, they do not have any children at the moment.

Who is Michael Emerson?

Michael Emerson is a well-recognized American film and television actor. Emerson is widely famed for his role as serial killer William Hinks on The Practice, Benjamin Linus on Lost, Zep Hindle in the first Saw film, and so on.

Moreover, he has won two Primetime Emmy Awards and has been nominated for three others, as well as earned other awards and nominations.

Michael Emerson was born on 7 September 1954. At present, his age is67 years old. Likewise, his birthplace is Cedar Rapids, Iowa, the USA.

Michael is the son of his father, Ronald H. Emerson whereas his mother is Carol(nee Hansen). Moreover, he is the only child of his parents.

Talking about his nationality, Emerson holds an American identity whereas his ethnicity is German, Irish, English, Norwegian, Czech.

Regarding education, the actor studied at Drake University in Des Moines, Iowa, and majored in Theater and minored in Art. Later, he attended National Theater Institute at The Eugene O’Neill Theater Center. Emerson then took a Master of Fine Arts degree at the University of Alabama in the Alabama Shakespeare Festival acting program.

Initially, Michael started his career by landing a role in 1997 as Oscar Wilde in Moises Kaufman’s critically acclaimed off-Broadway play Gross Indecency: The Three Trials Of Oscar Wilde. Later he featured in an off-Broadway production of Le Misanthrope.

The famous actor in advance won an Emmy Award as Outstanding Guest Actor in a Drama Series for portraying serial killer William Hinks in several episodes of The Practice. In 2006, Emerson started working as a guest star portraying the role of Benjamin Linus on the serial drama television series, Lost.

Emerson has also won an Emmy Award nomination in the Outstanding Supporting Actor category in 2007 and 2008 for his work in the third and fourth seasons. Ultimately, the star earned the award in 2008 after being nominated for his role in the fifth season.

On 31 July 2010, Michael and Preston performed Pultizer Prize for Drama as a fundraiser for the Stage, a South Carolina theatre. He also played a billionaire who teams up with a supposedly dead CIA agent to fight crime in New York City.

A famed star, Emerson has earned a handsome amount of money from his profession. He lives a lavish lifestyle along with his family.

It is reported that Michael Emerson has an estimated net worth of $8 million. Moreover, he earns more than $100 thousand per episode.

Michael has never been part of any controversial matter or rumors till now. The actor has been preoccupied with his professional and private life.

It seems that Emerson prefers enjoying his personal life and does not want to merge it with his professional life.

67 years old star, Michael has handsome looks and an admirable personality. He stands at a height of 5feet 8inches. Also, he has a balanced body weight of 75 kg.

Furthermore, Emerson has blue eyes whereas his hair is black.

Regarding his social media presence, Michael Emerson is an active personality on social media. Michael has more than 37.1k followers on his official Instagram account @officialmichaelemerson.

He is also active on Twitter with around 48.6k followers.

Moreover, Emerson is also available on Facebook with nearly 105k fans and supporters.