Michael Evans Behling is a biracial American actor plus model. He is currently Single. 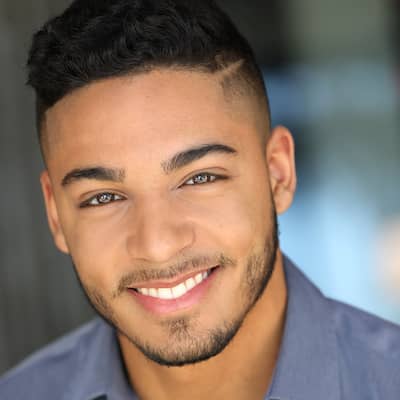 Michael Evans Behling’s relationship status is possibly single. He has not shared the details of his affair or girlfriend with the public.

Who is Michael Evans Behling?

Michael Evans Behling is a biracial American actor plus model. He is known for his popular character of Jordan Baker in All American (TV Series).

He mostly takes part in animal rights and mental health awareness. In 2021, he portrayed the role of Jackson Stone in a Direct-to-video film A Cinderella Story: Starstruck.

His birthdate is 05 March 1996 and he was born in Columbus, Ohio, United States. The name of his mother is Carol and his father is Mike.

He was adopted by his dad and mom but the detail of his biological parents are not revealed.

Michael’s ancestry is Nigerian-German and has a sister named Andrea Behling. His two brothers are Matt Behling & Adam Behling.

As per his academics, he first attended Columbus North High School and then Indiana State University. But from the latter, he dropped after two years.

Michael Evans Behling started his acting career in 2017 by appearing in an episode of Empire as a Handsome Dude. Moreover, he was also briefly seen in Grey’s Anatomy as Brady and Entertainment Tonight as Self.

His most popular role was in a sports drama series titled All American. In this, he plays the role of Jordan Baker who plays as a quarterback for Beverly High School.

The other main casts of this show are Daniel Ezra, Greta Onieogou, Cody Christian, and more.

Also, he once promoted brands such as White Castle, Isotoners, Nike, and Finish Line. He teamed up with Nicholas Stevens, Drew Thompson, and Floyd Athaide to form a clothing line DesignedAt5AM.

This actor is keeping himself away from rumors and desperate scandals.

Michael Evans Behling’s height is 6 ft 2 inches and his body weight is 88 kg. Similarly, he has dark brown eyes plus his hair color is dark brown.

He has a fit and toned body which he often flaunts on his social account posts.

He also has a TikTok account with more than 1.8 million fans.