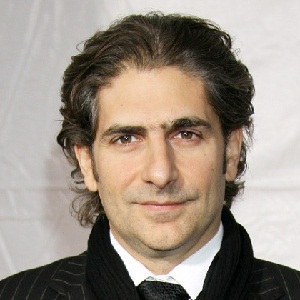 My family is my life, and everything else comes second as far as what's important to me

I do smoke in real life. A lot. We're all smoking right now in fact

There's too many actors in LA. I mean, I'll go out there from time to time, but I always find it pretty soul-destroying. I don't drive, and the people kind of rub me the wrong way. It's just not home. You know? It's not New York. It's not... my town.

Moving towards his personal life, he is married to his longtime girlfriend, Victoria Chlebowski from the year 1995. They were dating from a very long time. They live in Santa Barbara, California. He has three children including his son named Vadim who is an aspiring actor and also, a comedian. There doesn’t seem to be conflict and anything like divorce between the couple.

Who is Michael Imperioli?

Michael Imperioli is an American actor, writer, and director. He is well-known for his Emmy Award-winning role as Christopher Moltisanti in the hit show The Sopranos.

He grew up in several different areas around New York City including Ringwood, New Jersey and Yonkers, New York.  In his early childhood, he attended Lincoln School in Mount Vernon. He was graduated from Brewster High School in Brewster, New York in 1983.

During his career, Michael’s first film role was a small part in the 1989 movie “Alexa”. He would soon appear in a series of very notable films including “Lean on Me”, “Jungle Fever” and “Malcolm X”.

One of his most famous earlier roles was that of Spider in Martin Scorsese’s 1990 gangster movie “Goodfellas”. In one of the film’s most famous scenes, Spider talks back to Joe Pesci and is subsequently to death by Pesci’s enraged character.

Between 1990 and 1999, Michael appeared in a series of high-profile films until landing the part that made him a household name. Although, Michael is probably most famous around the world for playing the role of Christopher Moltisanti on the award-winning HBO drama The Sopranos which ran from 1999 to 2007.

Hence, Michael appeared in all six seasons of the critically acclaimed show. While on The Sopranos, Michael was nominated for a Golden Globe and five Emmy Awards. However, he won an Emmy in 2004 as part of the show’s fifth season. He has a net worth of $20 million.

There are rumors that Michael Imperioli secretly married have caused quite a stir among fans.

He has a perfect height standing with 5 ft 8 inches tall. He has hazel eye color with salt and pepper hair color. His shoe size is unknown.

Furthermore, also find out more about the early life, career, net worth, relationships, and controversies of actresses like Justin Roiland, Chandra Russell, and John Finn(actor).