(CEO of My Pillow) 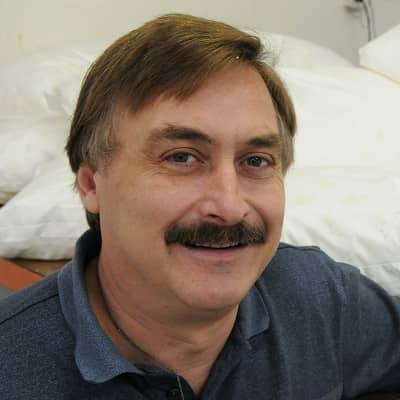 Michael J. Lindell is currently divorced and single. His first wife’s name is Karen Dickey and they divorced each other after 20 years of marriage.

The reason for their separation was that Mike was addicted to drugs and alcohol.

Together this couple has four children, two daughters, and two sons. Their names are Heather Lueth, Lizzy Meyers, Darren Lindell, and Charlie Lindell.

Mike then exchanged vows with ​Dallas Yocum ​in June 2013. Before their wedding, they signed a prenuptial agreement and Dallas left him in mid-July of the same year.

Who is Michael J. Lindell?

Michael J. Lindell is an American businessman. He is known for founding My Pillow, Inc and is also the CEO of this company.

He is related to the Republican party.

He was born on 28 June 1961 in Mankato, Minnesota, US. Moreover, his father and his mother’s names are behind the curtain.

His descent is Caucasian. Regarding his academics, he went to the University of Minnesota but never completed his studies.

Michael J. Lindell is one of the popular faces of the business world. He established his company My Pillow in the year 2004. Their open-cell and poly-foam design are famous and they have been patented.

Started with only five employees, as of 2021, it has more than 1500 working employees. They used to sell products at malls, trade shows, and state fairs.

But in 2016, this company was dragged to court. They said that their pillows can cure snoring, fibromyalgia, migraines, and more. This lawsuit was finalized with an amount of $1M.

He made his son Darren chief operating officer in 2020.

He holds an estimated net worth of $300 million as per the sources. The income from his company is around $280 million per year.

He once owned businesses like carpet cleaning, lunch wagons, and a few bars and restaurants. Furthermore, he has also founded charitable organizations like Lindell Foundation and Lindell Recovery Network.

This CEO recently was on the media for his Twitter account. He is permanently banned from this social site as he was giving false information about the 2020 election.

Moreover, he also said that oleandrin is the cure of coronavirus in White House meetings. But there is no proof of it being safe or effective.

Regarding Mike Lindell’s body features, his height and his body weight are of average size. Moreover, the color of his eyes is light brown and he has light brown hair.