Michael Jordan is a married person. He tied a knot with Juanita Vanoy in September 1989 and had been blessed with two sons, Jeffrey Michael and Marcus James, and a daughter, Jasmine.

The couple filed for divorce on January 4, 2002, citing irreconcilable differences, but reconciled shortly thereafter. They, again and again, filed for divorce and were granted a final decree of dissolution of marriage on December 29, 2006, commenting that the decision was made “mutually and amicably”.

Then, he proposed to his longtime girlfriend, Yvette Prieto, Cuban-American model on Christmas 2011. They tied their knot at Bethesda-by-the-Sea Episcopal Church on April 27, 2013.

The couple now is living a happy life with no signs of rumors and divorce. 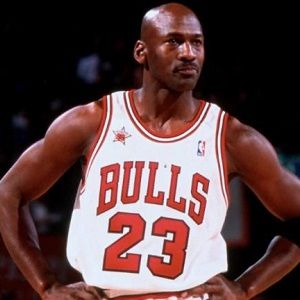 I can accept failure, everyone fails at something. But I can't accept not trying.

Who is Michael Jordan?

He is one of the greatest basketball players of all time by accumulation as mentioned on the official NBA website.

The basketball player was born as Michael Jeffrey Jordan in Brooklyn, New York to James and Deloris on 17th February 1963. He served in the electrical and heavy equipment industry while her mother in a bank.

Moreover, their family consisted of four other children namely James R. Jr., Larry, Deloris, and Roslyn. Later on, they relocated to Wilmington, North Carolina. Another, he learned to be hardworking and independent through his parents during his childhood.

His nationality is American and his ethnicity is African-American.

On talking about his education history, he joined Wilmington’s ‘Emsley A. Laney High School. The ‘University of North Carolina’ offered him a scholarship based on his performance in basketball at the final moment.

He received a graduation in cultural geography from that university.

He then became one of the parts of a gold medal-winning team that included players like Steve Alford,  Sam Perkins, and Patrick Ewing in the ‘Summer Olympics’ held in 1984.

Additionally, Jordan proved his mettle scoring an above-average ppg of 28.2 as a part of ‘Chicago Bulls‘, a team that had no such luck with the victory during 1984-87. Another, the young basketball player made 200 steals and 100 blocks in a single season, being the first to do so in the history of ‘NBA’.

Furthermore, Jordan helped the ‘Bulls’ sail through the playoffs and reach the ‘Eastern Conference’ finals in the next season of 1990-91.  He once again became a member of the “dream team” in the ‘Summer Olympics’ of 1992.

In addition, the basketball player appeared in three seasons of the ‘NBA’ championship. He was able to beat, ‘Utah Jazz’ and ‘Seattle SuperSonics‘  in the two championships during 1995-98. Besides, Jordan took retirement from the game on January 13, 1999, but returned as the President of Basketball Operations the following year for team ‘Washington Wizards.

Moreover, he appeared in his final ‘NBA All-Star’ match in 2003 against ‘Philadelphia 76ers‘. Another, he established his own motorcycle racing team namely ‘Michael Jordan Motorsports’ in 2004 after he was removed from his post of President with the ‘Washington Wizards‘.

This talented player has earned different NBA awards, including ‘Defensive Player of the Year,  ‘Rookie of the Year’, ‘Slam Dunk Contest Champion’ during 1984-88. He also has received the entitlement as ‘NBA Champion’ on various occasions.

He received the gold medal as a member of the winning team in the ‘Summer Olympics’ in 1984. ,  Various magazines, including ‘ESPN Sports’, and  ‘SLAM’ have ranked him as one of the greatest sports personalities.  ‘North Carolina Museum of History and ‘Naismith Memorial’ has included him in the ‘Hall of Fame.

The player has an enormous amount of salary that he received from his career but is currently unknown. His net worth is estimated to be 2.2 billion dollars as of 2022.

This player has a mansion in Jupiter, Florida, and he also owns a jet worth $50 million.

He has maintained his personal life and kept his life far from the media. Thus, there are currently no records and data available regarding his rumors and controversy.

The basketball player Michael Jordan is 6 feet 6 inches tall with a body mass of 98 kg. He has got brown eyes and a bald head.