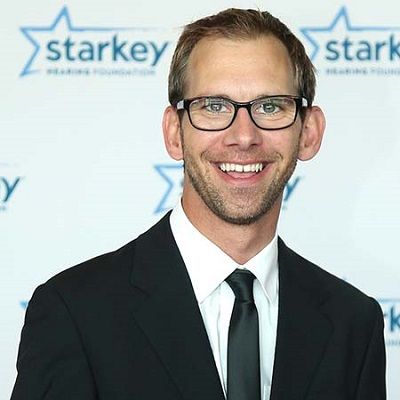 Together they have a son named Jackson Kutcher.

Who is Michael Kutcher?

Michael Kutcher is an American businessman. He is also a well-known public speaker and advocate.

As an advocate, he works for children with cerebral palsy and organ donation.

Michael Kutcher was born on 7th February 1978 in Cedar Rapids, Iowa, U.S. He is the son of father Larry M. Kutcher and mother Diane Finnegan Kutcher.

His father is a factory, Larry M. Kutcher worker of Czech descent and his mother, Diane (née Finnegan) is a Procter & Gamble employee of Czech, German, and Irish ancestry.

His fraternal twin brother Ashton Kutcher is an American actor and producer. Ashton shows love and affection towards his brother Michael.

He has an older sister named Tausha Kutcher.

Michael was born a few minutes after his twin brother Ashton was born. He weighed only 4 pounds and was over-oxygenated.

When the twin brothers turn three, his mother noticed that Michael was lagging behind and he was generally ‘slow’.

He was diagnosed with cerebral palsy and his motor function was affected due to the disability. He faced trouble while performing physical tasks with his right side.

Michael is 80 percent deaf in his left ear and he has had two cataract surgeries. When he was thirteen, he was diagnosed with viral cardiomyopathy.

His heart grew four times the size of a normal one. Doctors said that he had three to four weeks to live. But he had a cardiac arrest which shortened his life expectancy to 48 hours.

However, he received a heart transplant which saved his life.

He graduated from Mount Mercy University in Cedar Rapids, Iowa with a major in business management and marketing, and a minor in finance.

Michael Kutcher is a national Public Speaker. He delivers a message of inspiration, hope, and appreciation through his website.

He is a spokesperson and advisor for the Cerebral Palsy Foundation. In the year 2010, he visited the White House and Congress on behalf of the Reaching for the Stars Foundation.

Likewise, he is an advocate for organ donation and a spokesperson for ‘Donate Life BetheGift Be the Gift campaign’.

Net Worth and Earnings

Michael Kutcher has salt and pepper hair with hazel eyes. He is 6 feet tall and has an average weight.

The secretive romantic life of the imprisoned murderer, Michael Gargiulo with Amber Touchton!