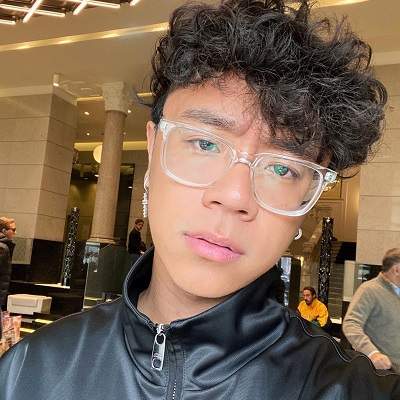 Before that, he was in a relationship with Analisseworld. She was featured on the YouTube video, Whisper Challenge with Le on his YouTube channel. After that, they have even spotted together in TikTok videos too.

However, they have not featured in any social media platform together with suggests the possible break up between them.

Who is Michael Le?

American Michael Le is a social media star. He is renowned for his dance videos that went viral on Instagram and TikTok.

He is also the brand ambassador of Bang Energy.

Michael Le was born on the 19th of March 2000 in West Palm Beach, Florida. He is of Vietnamese ethnicity.

Often he is spotted with his mother, Tina in an Instagram post. He is the eldest among his three siblings that include two brothers, Jonathan and Daniel, and a sister, Tiffany.

To date, he has not shared any details of his father and education.

The TikTok star initially used TikTok as a platform to showcase his talent as a dancer. In his first video, Michael Le was performing with his crew members. The very first viral went viral with around 65.8k views. The audience in TikTok inspired him to make such videos.

Unlike others, he shares pure content that relates to dance. With each passing video, people began to connect with his passion for the dance. Also, more and more audiences started to get connect with him.

As of now, his TikTok account has around 18.2 million followers with 472.8 million likes. In the course of making TikTok videos, he has collaborated with fellow TikTok star-like Tayler Holder, Sebastien Andrade, and Tony Lopez.

Besides being a successful TikTok star, he is also a popular face in the world of Instagram and YouTube too.

On the 17th of May 2014, he created a self-titled YouTube channel. On the channel, he uploads his dance videos, tutorials, and vlogs. He started the channel to show the world how dancers put their hearts and soul into his dance.

Later, on the 13th of July 2019, he started another channel where he uploads his funny stuff like challenge and reaction videos.

Apart from YouTube, he posts his dance videos on his Instagram accounts too. Through Instagram, he shares some of the interesting moments of his life which catch the eyes of his followers.

Through his career as a social media star, he has made a net worth of $4 million. With an engagement rate of 3.32%, his earnings per video post in TikTok are in the range of $10k t0 $18k.

Michael Le has black eyes with black hair. Details regarding his height and weight are not available.

He has two YouTube channels with the name Justmaiko with 467k subscribers and Michael Le with 281k subscribers.