Michael Malarkey is a British-American actor and musician. 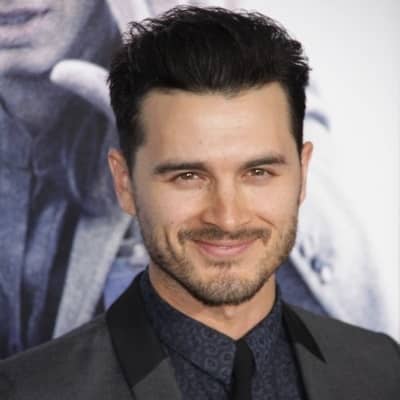 Forgive me, I always notice a woman's neck. I'm a neck person!

Michael is a married man. The actor is married to Nadine Lewington. She is also an English actress. Michael and Nadine tied the knot on the 6th of June, 2009.

The couple has also played together in an episode of The Project Blue Book.

They have two kids. The pair welcomed their first son, Marlon Malarkey on 10th Sep 2019. And their second child Hugo Konstantine Malarkey was born in September 2019.

Who is Michael Malarkey?

Michael Malarkey is a British-American actor and musician. He is popular for starring as Lorenzo Enzo St John in the series The Vampire Diaries.

Michael was born on June 21, 1983, in Beirut, Lebanon. He has mixed descent (Irish, German, Arab, Italian-Maltese).

Michael was fond of singing and playing guitar from his childhood. He spent his early childhood in Yellow Springs Ohio and later moved to London in 2006.

Michael completed his education at the London Academy of Music and Dramatic Art.

Malarkey started his career performing in various London stage and theatre productions. He has played the lead roles like Tennessee William in the Spring Storm, Eugene Onell in Beyond The Horizon by Eugene Onell, as singer Elvis Presley in the Original London Company of million-dollar Quartet, and many others.

Likely talking about his other works, he has starred in various movies and TV series too. The actor is also popular for playing Lorenzo Enzo St John in season 5 of the television series The vampire diaries. His role became so popular and his role was upgraded to its other seasons too.

Michael is also well known for playing as Dizel in Jean Claude Van in 2017, as Sam Foster in the Oath for Crackle and as Cinch Barton in the film A violent separation.

Talking about his music works, Michael appeared in the two EPs in 2014 and 2015 as a musician. Furthermore, he released his debut album Mongrels on 8 September 2017. And his second album, Graveracer was released in January 2020.

He has his own house in Los Angeles, California, and resides along with his family.

Michael seems not to merge his personal life with his professional life. And so he hasn’t been part of any such rumors and controversial news.

Michael has a well-maintained body standing at the height of 5 feet 11 inches. Likely, he has 75 kg of body mass. As well as, he has attractive brown eyes with dark brown hair.

Similarly, he has his own YouTube channel with 46K subscribers.

You may also read the bio of Jackie Long, Wes Brown, Oliver James, and Chayce Beckham.