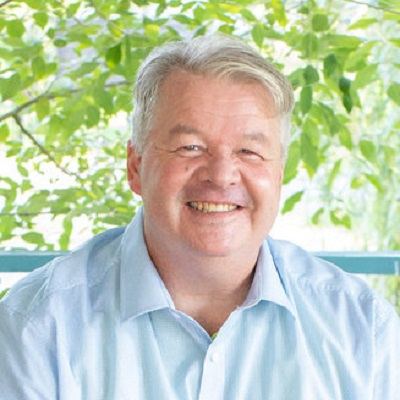 Michael Olson is happily married to Anna Olson. The couple got married on the 2nd of October 1999.

The couple met each other through a mutual friend. At the very first meeting, he felt that she was the one for him due to her preference for food. Whereas Michael’s deep voice and the confidence and authority along with softness in his voice was the first time that impressed him.

Who is Michael Olson?

Canadian Michael Olson is a chef and author. He is renowned as the better half of the pastry chef, Anna Olson.

Also, he is a culinary professor at the Canadian Food and Wine Institute at Niagara College.

Michael Olson was born in Saskatchewan, Canadian. He is of mixed (Danish, Norwegian, Swedish ) ethnicity.

To date, he has not shared any details on his family background including father, mother, and siblings.

As a child, he never intended to be a chef. At the time, his aim was to be a doctor. For that, he also studied science at school. During university days, he took a break from his school and went to Japan to play semi-pro hockey.

In Japan, he first discovered his love and passion for the food. Also, he understood more about food in the country. In 1985, he returned to Canada and applied for the George Brown College in culinary management program. From college, he graduated in 1987. After graduation, he started working in a restaurant.

In 1998, Michael Olson started his career at Coco Lezonne as a chef for a year. After that, he moved to Toronto and worked in The Liberty. In 1991, he became the executive chef of the restaurant, Navy Blues, and worked for the 3 years.

After that, he joined the co-owner and chef of the restaurant, On The Twenty in Ontario. In 2001, he left his career as a chef and shifted his career as a culinary professor. Since then, he has been teaching at the Niagara Culinary Institue.

Apart from that, he is also a talented author. Some of his cookbooks along with the published date is-

As of 2020, he has an estimated net worth of $1 million. His earnings as a chef are in the range of $27k to $67k. Besides that, he also makes through royalties of his books. Also, his earnings as a culinary professor are $50k on average.

Talking about net worth, his wife, Anna has an estimated net worth of $8 million. Her net worth is attributed to her career as a pastry chef.

Michael Olson has blue eyes with light hair. He has a decent height and an average weight.

To the date, he has not been through any type of controversy that created a buzz in the media. Besides that, he has also managed to maintain distance from any sort of rumors.