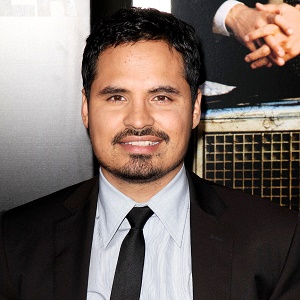 I came to L.A. when I was 19, and my two roommates were blue-eyed, blond dudes. I helped coach them, and they both landed pilots

I feel lucky. I feel blessed. If you get blessed with some ability, I think you have to work hard at it. Michael Jordan was a great basketball player, but he wasn't the best shooter, even though he had the skill, and he had to work and work at it.

Michael Pena, a musician, and an actor is currently married to Brie Shaffer. Brie and Michael are in a marital relationship since 2006 and got the opportunity to be a parent of his child Roman Pena in September 2008.

Now, Michael and Shaffer seem happy together with their son Roman and there is no any sign of divorce in the coming days. Talking about the past relationship status of Michael Pena, it is believed that Michael may be in a relationship with numerous celebrities but, due to low profile nature of Michael’s love life, there is no any information relevant to his love life.

Who is Michael Pena?

Michael Pena is an American actor and musician, who is immensely popular worldwide for his work as an actor in the Paul Haggis-penned films, ‘Million Dollar Baby’ (2004) and ‘Crash’ (2004). These were two movies winning Best Picture Oscar award and is currently working as Marquez and Red in the upcoming movies ‘Murderer on the Orient Express’ and ‘A Wrinkle in the Time’.

Michael was born in Chicago, Illinois, United States of America, on 13 January 1976. His nationality is American and ethnicity is mixed(Charcas and Villa Purificación).

He was born to Nicolasa, a social worker, and Eleuterio Pena, a factory worker. Michael Pena was raised in Chicago but, he and his family belonged to Mexico where his father was from Villa Purificacion, Jalisco and his mother were from Charcas, San Luis Potosi.

Though Michael Pena was not so active in participating in school programs and is a Scientologist, he is now a very well-known actor with a lot of opportunities on his way.

Yes, the career which Michael Pena chose was something very unique and different from the way he wanted it to be. He started his first job as a banker, but, now, we can see in one of the best Marvel’s movies ‘Ant-man’ and in some of the movies nominated for ‘Best Picture Academy Award’.

Michael Pena is active in Film Industry since 1994 as a common actor but, he got an opportunity to play in Best Picture Oscar-Winning film ‘Million Dollar Baby (2004)’ and ‘Crash (2004)’ in which he was praised for his role in Crash making the audience go highly emotional.

Before playing a role in ‘Babel’, Michael appeared in the Golden Globe Winning series ‘The Shield’ and made his stardom increase to a next level. After appearing in the action film ‘Fury’ in 2014, he took a big leap and made himself eligible to play the role of Luis in the Marvel’s 2015 film ‘Ant-Man’.

Currently, he is working for his role as Marquez in the film ‘Murder on the Orient Express’ along with his role as Red in a Film ‘A Wrinkle in Time’. Apart from his acting in Film Industry, he also appeared as Luis in the video game Lego Marvel’s Avenger.

Michael Pena: Salary and Net Worth

Michael’s salary is unknown but his net worth is estimated to be around $5 million.

Michael Pena and Brie Shaffer were rumored as a couple who is struggling to continue their relationship with each other. This was the news that hit the headlines of various celebrity-related news portals but, was soon denied by Michael. Now, it is just limited as a rumor.

Michael Pena has a height of 5 feet 7 inches. His body weighs 68kg. He has black hair and brown eyes.