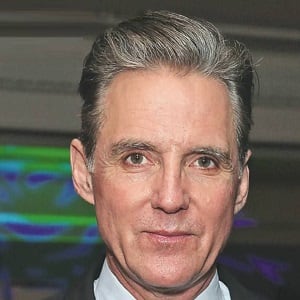 Michael Praed was previously married to Karen Landau. They married in November 1994. The pair has two children together, Gabriel Praed and Frankie Praed. They later separated in 2009.

Praed is currently a married man. He is married to British stage and television actress Josefina Gabrielle. Their marriage is going strong as there is no news regarding any extramarital affairs at present.

Who is Michael Praed?

Michael Praed is a British actor. People mostly know him for his role as Robin of Loxley in the British television series ‘Robin of Sherwood.’ Additionally, he has appeared in several other movies and television series including ‘Emmerdale’, ‘Timewatch’, and ‘Casualty’ among others.

Michael Praed was born in Gloucestershire, Berkeley on April 1, 1960. He was born to parents Kay Prince and Derrick Prince and he spent his early years in Iran. He became interested in the world of acting at an early age.

Michael is of English and British nationality. Furthermore, there are no details available about his ethnic background at present.

Talking about his education, Praed attended Guildhall School of Music and Drama and the independent school Eastbourne College.

Michael Praed initially appeared in the TV series ‘The Gentle Touch’ as T.D.C. Rogers in 1982. Additionally, in 1983, he had roles in other TV series: ‘The Professionals’ and ‘American Playhouse.’ Michael also had the role of Robin of Loxley in the TV series ‘Robin Hood.’ Since then, he has appeared in several other movies and television series. At present, he has more than 25 credits as an actor.

Some other movies and television series that Praed has appeared in are ‘Not Going Out’, ‘Hindenburg’, ‘Timewatch’, ‘Doctors’, ‘The Bill’, ‘Casualty’, ‘Mile High’, ‘9 Dead Gay Guys’, ‘The Secret Adventures of Jules Verne’, ‘Darkness Falls’, ‘This Town’, ‘French and Saunders’, ‘Crown Prosecutor’, ‘Staggered’, ‘Without Walls’, ‘Riders’, ‘Writer’s Block’, ‘Son of Darkness: To Die for II’, ‘Nightflyers’, and ‘Dynasty’ among others.

Praed has not revealed his current salary. Furthermore, there are no details available about his estimated net worth at present.

Praed has not been part of any notable controversies in his career. Furthermore, at present, there are no rumors concerning his life and career.

Talking about his body measurement, Praed has a height of 6 feet 1 inch (1.86 m) and a weight of 74 kg. Additionally, his hair color is dark brown/blonde and his eye color is hazel.