Michael Ray is an American country singer, songwriter. Michael was previously married to Carly Pearce. He is currently divorced.

Previously, he was married to her longtime girlfriend, Carly Pearce on 6th October 2019. The pair confirmed that they were dating on July 19, 2018.

The couple revealed their separation soon after being married for eight months in June 2020. 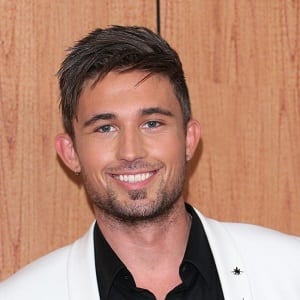 Who is Michael Ray?

Michael Ray is an American country singer and songwriter. He released his debut single titled ‘Kiss You in the Morning’ which reached No. 1 on Country Airplay.

Ray was born in Eustis, Florida on April 29, 1988. He is the son of Jerry Roach. His parents divorced when he was just 8 years old. Additionally, he has stated that he suffered from chronic anxiety that began affecting both his mental and physical health as a child. He became interested in the world of music since his childhood years. He is of American nationality. His ethnic background is Caucasian.

Talking about his education, detailed information regarding Ray’s educational background is not currently available.

Ray initially won the completion ‘The Next: Fame Is at Your Doorstep’. Later, he released his debut single, ‘Kiss You in the Morning’. Additionally, he also released an EP of the same name in April of 2015. In addition, Ray and John Rich co-wrote Big & Rich’s 2015 single, ‘Run Away with You’.

Ray’s three studio albums are namely ‘Michael Ray’, ‘Michael Ray’, and ‘Amos’. Furthermore, his extended plays are ‘Tour Bootleg’ and ‘Kiss You in the Morning EP’. Some of his famous singles are ‘One That Got Away’, ‘Think a Little Less’, and ‘Real Men Love Jesus’.

Ray garnered the nomination for the American Country Countdown Awards in the category of Breakthrough Male of the Year in 2016.

Ray has not revealed his current salary. Whereas, his estimated net worth is $1.5 million.

Talking about his body measurement, there are no details available about Ray’s height and weight. His hair color is dark brown and his eye color is hazel blue.