Reflecting on the personal life of Michael Stipe, he is gay. Stipe has said ‘I had sex with, and enjoyed sex with, women until I met someone that I fell in love with, and who is now my boyfriend.’

The Washington Daily News had reported that Michael and Thomas had ‘secretly wed’. He lives with art photographer Thomas Dozol in an apartment in New York. Previously, he was also in a relationship with Jane Pratt and Natalie Merchant. 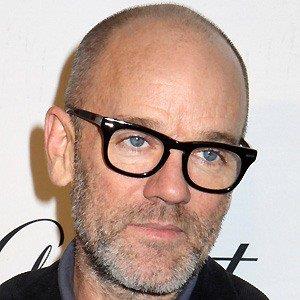 Radiohead are so good they scare me.

I guess I've figured out that I can't just blabber anything I want to anymore.

Who is Michael Stipe?

Multi-talented Michael Stipe is an American singer, songwriter, musician, film producer, music video director, visual artist, and philanthropist. He is active in the musical field since 1980.

He rose to fame as the lead singer and lyricist of the alternative rock band ‘R.E.M’.

Heis younger sister Lynda Stipe is also a singer of her own band ‘Hetch Hetchy’. He is of North American ethnicity and has an American nationality. His father worked as a serviceman in the United States Army which is why they often relocate from one place to another.

Since childhood, he has built up a strong interest in music. Stipe graduated from high school in Collinsville, Illinois and attended the University of Georgia in Athens, Georgia.

In the University, he studied studying photography and painting as an art major.

Talking about the career journey of Michael Stipe, he is active in the musical field since 1980. In 1980, he has become part of a band Tanzplagen. Then he met Peter Buck at the Wuxtry record shop with whom he started writing music.

Later, they were joined by Bill Berry and Mike Mills and named themselves R.E.M. The name was selected by Stipe at random from a dictionary. All of them dropped out from their schools to focus on the band.

They released their first single Radio Free Europe which became a college radio success. Then they signed with the  I.R.S. Records for the release of the Chronic Town EP one year later.

Their first album Murmur released in 1983 followed by their second album Reckoning in 1984. Stipe gained so much attention from the listeners due to his vocals and lyrics.

R.E.M first album Murmur won the Rolling Stone Critics Poll Album of the Year. In 1985, they traveled to England to record their third album Fables of the Reconstruction.

Their band has also recorded a song Let Me In from the 1994 album Monster in tribute to Cobain. They disband their band R.E.M in the year of 2011. Stipe has worked together with many artists like  Natalie Merchant, Tori Amos, Miguel Bose, Lacoste, and Chris Martin.

In addition, Stipe also participated in a Super-8 film called Just Like a Movie. On 10 April 2014, he inducted the American grunge band Nirvana into the Rock and Roll Hall of Fame. On 15 March 2017, he announced that he would debut his first solo composition at Moogfest.

Michael Stipe: Salary and Net worth

His success in career path has paid him well financially making his net worth estimated to be $75 million.

Michael Stipe has a slim body built up. He stands 175 cm tall. He has blue eye color and he has a bald head