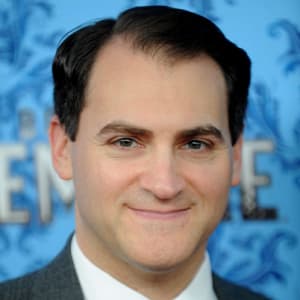 Film, for me, has been a process of learning on the job

My mom and my dad are ebullient people, and I think I carry that with me

I've found in my own life, if you try to struggle against what the universe is telling you, you set yourself up for more of a battle.

Michael Stuhlbarg is a married man. He married Mai-Linh Lofgren in Aug 2013. The couple doesn’t have any children yet.

Who is Michael Stuhlbarg?

Michael Stuhlbarg is an American actor who is best known for his role as professor Larry Gopnik in the 2009 dark comedy film A Serious Man, directed by Joel Coen and Ethan Coen, has also starred in blockbusters like Men in Black III and Hitchcock.

Whereas, his other notable supporting roles include Blue Jasmine (2013), Arrival (2016), and Doctor Strange (2016), as well as the third season of the anthology television series Fargo (2017).

Michael Stuhlbarg was born in Long Beach, California, on July 5, 1968, and he is currently 50 years old. His father’s name is Mort Stuhlbarg and his mother’s name is Susan Stuhlbarg.

He took interest in acting at the age of 11 after taking part in a community production Bye Bye Birdie, where he was a member of the crew and chorus team.

There is no information about his siblings. Michael holds American citizenship and Ashkenazi Jewish ethnicity. His birth sign is Cancer.

He attended training at The Juilliard School in New York City and graduated with a Bachelor of Fine Arts in 1992. He then went to the University of California, Los Angeles, and studied acting.

Michael has also attended the following school; the Vilnius Conservatory in Lithuania, the British American Drama Academy at Oxford, and the National Youth Theatre of Great Britain at the University of London. He also studied mime with Marcel Marceau.

Michael Stuhlbarg kicked off his career first as a stage actor, appearing in several classical and modern dramas staged by the National Actors Theatre. His first stage performance was in Saint Joan, where he played Charles VII of France, the following year, he played the title character in Richard II.

He starred in many other stage dramas including George Bernard Shaw’s Saint Joan and Shakespeare’s Timon of Athens. For his outstanding portrayal of a mentally disabled man in The Pillowman. His first movie appearance was in a 1998 drama A Price Above Rubies, where he starred alongside Renée Zellweger. In 2000, he played a dual role in William Shakespeare’s The Winter’s Tale.

He received favorable recognition for his performance in Tom Stoppard’s The Invention of Love in 2001. Stuhlbarg has starred in several other movies like Macbeth in Manhattan, Cold Souls, Body of Lies, Hugo, Men in Black III, Call Me By Your Name, The Shape of Water among others.

There is no exact information regarding his net worth, salary, or other incomes. However, some sources have calculated his net worth at around $3 million.

There was a rumor that Stuhlbarg to be a father. Currently, he is far from rumors and controversies.

Michael Stuhlbarg has a height of 5 feet 7 inches. Additionally, he weighs 80Kg. In addition, his chest, waist, biceps sizes are 39-33-13 inches respectively.