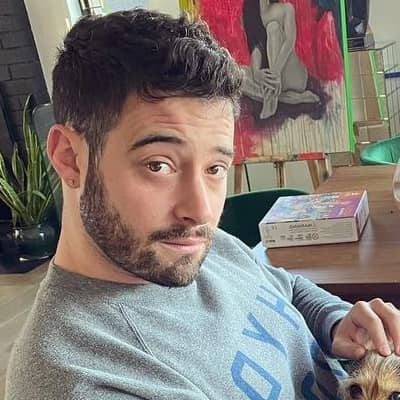 Michael Turchin is happily married to Lance Bass who is also one of the famous actors. The couple dated for one and a half years then they got engaged in September 2013.

On December 20, 2014, the couple got happily married at Park Plaza Hotel in Los Angeles. The couple was the first same sex-couple who exchange vows on cable television.

Their marriage ceremonial event was filmed and televised in a special E! presentation: Lance Loves Michael.

They have been trying to have a baby of their own via IVF but they have not been successful. In March 2020, the couple had lost a baby via the surrogate having a miscarriage at eight weeks.

It had been the couple’s ninth surrogacy attempt. They announced that they will try one more time, and if they are unsuccessful they may decide to adopt.

Who is Michael Turchin?

Michael Turchin is an American painter and actor. He is better known for his work in Aline Abduction, Isolation, On Haitus with Monty Geer. Turchin is known as the husband of NSYNC singer Lance Bass.

Michael Turchin was born in Miami Beach, Florida, United States on January 14, 1987. As of 2020, he is 33 years old. He holds an American nationality and belongs to Jewish ethnicity. His Zodiac sign is Capricorn.

Michael is the son of Stephanie Turchin and Bobby Turchin. His father was a general contractor and developer with the Turchin companies of Miami Beach. He has a twins sister named Lauren Turchin. He has 2 dogs named Chip and Dale.

There is no relevant information regarding his childhood and early life.

Michael graduated with a Bachelor of Science degree in finance from Georgetown University. Later, to pursue his career he attended Stella Adler Studio of Acting in Los Angeles.

In 2011, Michael debut in the film Isolation where he played a small side role in the film. The film rated as an average film.

Then he appeared in another film as Dirk in the film First Period in 2013. He also appeared in news tv-shows, Entertainment Tonight in 2015.

He features in several films in the role of Elder John Hastings in Immediately Afterlife (2013) and as a Michael in White Dwarf (2014).

There is no controversy available which creates a huge buzz in media. So, he maintained his personnel life and professional life equally.

The actor earned an estimated net worth of around $5 million.

Michel has Athletic Physique and height is around 5 feet 11 inches tall approximately and his weight is around 75 kg. Likewise, he has light brown hair color as well as eyes color. Furthermore, His Chest, Arms, and Waist sizes are 43, 14.5, and 31 inches.