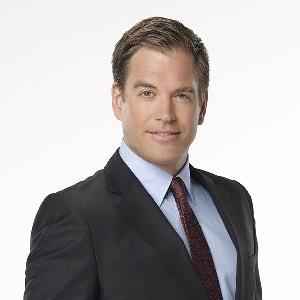 I wasn't a jock in school, and by the 10th grade, when I was in boarding school I was carrying water buckets for the girls' hockey team. I was the kid with long hair and glasses and acne trying to learn how to play guitar and piano in the music center. I was not an athlete past the age of 13 or 14 when they start throwing the ball really fast

I started running around my 30th birthday. I wanted to lose weight

I didn't anticipate the serenity. Being in motion, suddenly my body was busy and so my head could work out some issues I had swept under a carpet of wine and cheese. Good therapy, that's a good run

My wife gets pampered pretty well. She's had me trained since she was pregnant, when I started making her oatmeal with fresh berries every morning.

What is the relationship of Michael Weatherly?

Michael Weatherly has been married twice till now. He started dating the Serbian writer, Bojana Jankovic back in mid-2008. After a year of their love affair, they got married on Sep 30, 2009.

They together have a son and a daughter named Liam Weatherly and Olivia Weatherly. They are still together and there is no sign of divorce at all.

His first wife was Amelia Heinle, an actress. After dating each other for several years, they got married in 1995. After being in a married relationship for three years, they divorced in 1997. In their three years of marriage, they had a son August Manning Weatherly, born in 1996.  After his divorce, he started dating the American actress, Jessica Alba.

After dating each other for over two years, they got engaged in 2001, but they failed to keep their relationship longer and they separated in 2003. Before his engagement, he dated the beautiful models Vanessa Marra and Rachel Hunter for a year. Michael stayed single for a long time since 2003.

Who is Michael Weatherly?

Michael Manning Weatherly, Sr. is a famous American actor and director, widely known for playing Anthony on the television series NCIS from 2003 to 2016. He is also known for his lead role as Jason Bull in the television film Bull (2016-present).

Michael Weatherly was born as Michael Manning Weatherly Jr. on 8 July 1968, in New York City, New York. He holds an American nationality and he is of Irish and North American ethnicity.

He grew up in Fairfield, Connecticut with his parents Patricia O’Hara(mother) and Michael Manning Weatherly Sr.(father). He has a brother named Will Weatherly. He was interested in acting from an early age and he also had a passion for music since his childhood.

Michael has been active in the industry since 1988. After dropping out of college, he began acting professionally and began his acting career in 1988, with a small role on the TV show The Cosby Show (1988).  Later, he got a role as Cooper Alden in the TV film, Loving.

Later in 1992, he was cast in the TV series The City, in which he appeared from 1992 to 1996. After that, he moved to Los Angeles and got a regular role on the FOX television series Significant Others.

His performance in the series was highly appreciated by the audience and he started getting bigger roles in movies and TV films. In 2000, he was cast for Dark Angel (2000-2002), in which he played Logan Cale.

His performance in the 42 episodes of the film made him one of the most popular TV actors in America. Since then, he has appeared in more than thirty movies and TV films.

His role as Logan Cale on the TV series Dark Angel earned him the Best Supporting Actor in a Television Series Award in 2001 and 2002. He was also nominated for Teen Choice Awards- Favorite TV Actor for his role in Dark Angel.

Michael Weatherly: Salary and Net Worth

With a huge fan following and popularity, he has accumulated a net worth of 50 million dollars as of 2022, and he makes a salary of $10 million per year.

There is no rumor of him involving in any extra-marital affairs at present. Michael has not been involved in any controversies his entire life.

Michael Weatherly has a height of 6 feet 3 inches. His body weighs 86kg. He has hazel eyes and dark brown hair.