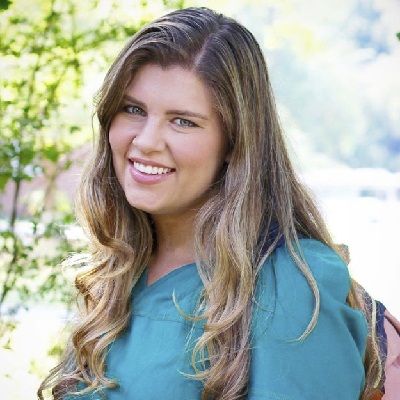 Michaela Bates is a married woman. Her husband’s name is Brandon Keilen and their affair was started around 2009. He proposed her in Great Falls, Virginia and the engagement ceremony was held in April 2015.

They got married on August 15, 2015. The wedding took place in Wallace Memorial Baptist Church in Knoxville, TN. This ceremony was attended by friends and family.

For the honeymoon, Michaela and Brandon went to Montana and Wyoming. However, due to infertility, this couple hasn’t blessed with any child.

Who is Michaela Bates?

Michaela Bates is an American businesswoman and TV personality. She has appeared in Bates family show Bringing Up Bates.

She is the daughter of mother Kelly Jo Callaham and father Gil Bates.

She holds an ethnicity of Caucasian.

Michaela during her early age was homeschooled. Then she finished high school and started to take classes from college plus.

She has also taken online classes in order to get a degree in Liberal Arts. In 2019, Michaela joined Tennessee College of Applied Technology where she is pursuing the nursing course.

Michaela Bates has worked as a nanny for many years. In 2011, she has also got a license in EMT.

She started to sell baby clothes, blankets, bibs, and other items in her online store. This business was started on March 1, 2017, but was closed on May 14, 2019.

Then again in Oct 2019, she along with her husband started another web store. They named it Keilen Corner. They sell sewing projects and a children’s book.

Michaela along with her family are popular because of their show Bringing Up Bates. Besides this, she also appeared in other shows like 19 Kids and Counting and United Bates of America.

This is a family reality show of Bates family which broadcasts on Up TV. This show was first aired on Jan 1, 2015, and is still running successfully.

Michaela has not landed in any kind of controversies or rumors.

This nanny and TV star have an estimated net worth of $1 million.

Michaela Bates has light brown eyes and light brown hair. Her height and weight are average.