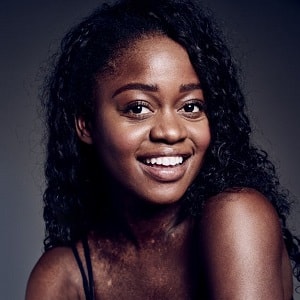 “Never be afraid of living and loving.”

Michaela DePrince is still unmarried however it is heard that she is romantically linked with Skyler Maxey-Wert. But there is no conformation from both of them.

She is busy developing her career as a ballet dancer.

Michaela DePrince, whose birth name is Mabinty Bangura, is a Sierra Leonean-American ballet dancer. She drew the attention of the audience in a very short period of time by her wonderful dancing performance despite suffering from the disease, vitiligo.

Michaela was born on 6 January 1995 in Philadelphia, Pennsylvania. Her birth sign is Capricorn. She was adopted by Charles Deprince (father) and Elaine DePrince (mother).

She was abandoned by her uncle due to her disease and was brought to an orphanage during the civil war. It is said that her biological father was shot and killed by the Revoluntary United Front when she was three years old. Her mother died of fever and starvation.

Michaela has suffered from a disease called vitiligo which causes patches of skin to lose its color. She was abused and taunted in the child care center.

She practiced Judaism after converting from Islamism.

She has done her schooling from Keystone National High School and graduated from Jacqueline Kennedy Onassis School where she took her ballet classes.

Michaela DePrince saw a cover photo of beautiful ballerina en pointe and she made her determination to become like a ballerina. Soon, an American family adopted Michela and she was the eighth of their eleventh children.

Her new family recognized her talent and supported her to join a ballet class. She worked hard to sharpen her skills and she made a strong thought and determination to overcome the stereotypes of conventional beauty and racial barriers in the world of ballet.

Michaela debuted as a guest principal at the Joburg Ballet in South Africa in the ballet documentary, ‘First Position’in 2011, and appeared on Dancing with the Stars. She showed her performance with the Dance Theatre of Harlem professional company at the age of 17.

She loves to reach disadvantaged people besides dancing and she shares her message of hard work, hope, and perseverance. Michaela encourages and motivates them to strive for a dream. She was named an Ambassador for War Child Netherlands in 2016.

Michaela has been awarded Youth American Grand Prix in 2010 which was a scholarship that provided her to study in The Jacqueline Kennedy Onassis School.

Michaela DePrince: Net Worth and Salary

It is estimated that she has a net worth of $0.5 million and her main source of earning is from her ballet dancing. She was also abandoned by child care.

She was abandoned by her uncle during childhood calling her devil’s child because of disease, vitiligo.

Her waist size is 27 inches and her hip size is 34 inches. She wears a dress of size 4 US and she wears a shoe of size 8 US. She has black hair and black eyes.

To know more about Angelica Kenova, Brenda Venus, and Kip Gamblin, please click on the link.