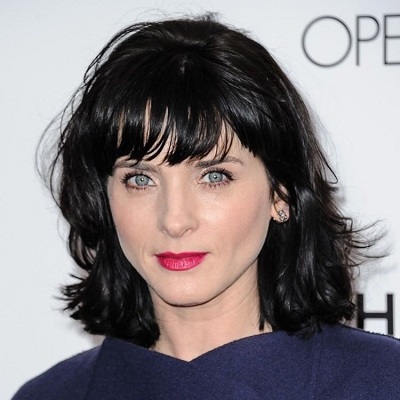 Michele Hicks is married to John Lee Miller. John Lee Miller is also an actor who is known for the portrayal of Simon “Sick Boy” Williamson in the dark comedy-drama film Trainspotting. Before they were married, John was in a relationship with Angelina Jolie.

But in 2006 John started dating Michele. They got married in July 2008, since then they are together and in  December 2008 they gave birth to their first child Buster Timothy Miller.

Who is Michele Hicks?

Michele Hicks is a TV star as well as a Film star. Before pursuing an acting career she was a fashion model.

She is popular for appearing in many hit shows such as ‘Law & Order: Criminal Intent,’ ‘CSI: NY,’ ‘The Shield,’ and ‘Law & Order: Special Victims Unit.’ etc.

Michele Hicks was born on June 4, 1973, in Essex County, New Jersey, USA. Michele’s nationality and ethnicity are American. She is now 46 years old, her birth sign is Gemini.

Seemingly, there is no information about Michele’s parents and her siblings. Their personal information is still not disclosed to any media or sources. She grew up in northern New Jersey and moved to New York City at the age of 14.

About Michele’s education, there are no academic records.

At the age of 14, she moved to New  York and started working as a door girl. After that, Michele got a job in clubs such as  ‘Danceteria’ and ‘The Limelight.’ there she worked as a bartender.

As she was working there she met people from the fashion industry and was told she could try her luck. After that, she started submitting her photographs to fashion agencies soon her photographs caught the attention of famous fashion photographer Steven Meisel.

In 1990 she started working with Steven Meisel. Then in 1997, she got a chance to pose in an ‘Italian Vogue’ with other famous models like Naomi Campbell, Amber Valetta, Kristen McMenamy, Carolyn Murphy, Vincent Gallo, and Kylie Bax.  Then she became a professional fashion model before leaving to become an actress.

In 1999, Michele Hicks debuted in an independent film titled ‘Twin Falls Idaho.’ She played the role of ‘Penny’ there. After that she played Nicki in the 2001 David Lynch-directed TV movie ‘Mulholland Dr.’ Then her acting career started to bloom she was in films like Deadly little secrets, Mrs.

Hope, and in the same year, she also played Kimmie in the crime drama TV series ‘Law & Order: Special Victims Unit.’ she then received roles in many good tv series as well as movies. Her recent work was ‘Orange is The New Black’ where she played the character of Michelle Goldstein.

Michele has won only 1 award in her career. She won Outstanding Achievement Award in 2004 for the movie ‘ The Messenger’.

As an actress and a former fashion model, Michele Hicks has earned a good sum of money during her professional life. Her net worth is $1milion. But her salary is not made public.

Michele Hicks has no rumors or controversies in her reel as well as real life.

Hicks is 5ft 8 inches tall her weight is 58 kg and her shoe size is 8.5.  She has black colored hair and her eyes are blue. Besides, there is no information about her shoe size and dress size.