Michele Lee is an American actress, singer, dancer, producer, and director. She is known for her role in the opera Knots Landing. She is a married woman and has a child. 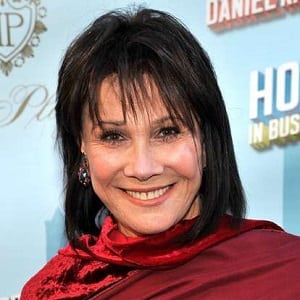 I love doing things that may not be everybody else's cup of tea.

I was known as the entertainer, that's where I got my identity.

The first audition I ever went on, I was accompanied by my mother at the instruction of my father. "You have to learn how to take rejection if you really want to be an actor", he said. He had to eat his own words. I got the job.

[Differentiating between Knots Landing (1979) and Desperate Housewives (2004)]: The Teri Hatcher character, ("Susan Mayer"), who is the moral center, if you will, that would be like a "Karen" , my character. Then, there's the bad girl, Nicollette Sheridan, ("Edie Britt"), who is much like Donna Mills.

Michele Lee was previously married to James Farentino. They met on the set of the play, ‘How to Succeed in Business Without Really Trying’.

She married James on 20 February 1966. They later separated on 22 June 1983. The pair has a son David Farentino from this marriage.

Presently, Lee is a married woman. She is married to producer and writer Fred A. Rappoport. They married on 27 September 1987. Their marriage is going strong as there is no news regarding any extramarital affairs at present.

Who is Michele Lee?

Michele Lee is an American actress, dancer, singer, director, and producer. People mostly recognize her for her role as Karen Cooper Fairgate MacKenzie on ‘Knots Landing’.

Additionally, she has also appeared in several movies including ‘Along Came Polly’ and ‘The Comic’

Lee was born in Los Angeles, California as Michelle Lee Dusick on June 24, 1942. She was born to parents Sylvia Helen and Jack Dusick. Her father was a make-up artist.

She became interested in the world of acting since her childhood years. She is of American nationality. Furthermore, she belongs to the Ashkenazi Jewish ethnic background.

After graduating from high school, Michele Lee auditioned for the Broadway play, ‘Vintage ’60’. She eventually became a Broadway performer at the age of 19 and performed in ‘How to Succeed in Business Without Really Trying’.

Additionally, she also had roles in Broadway productions of ‘The Tale of the Allergist’s Wife’ and ‘Bravo Giovanni.’ Since then, she has appeared in numerous other movies and television series. All in all, she has over 40 credits as an actress.

Some other movies and television series that Lee has appeared in are ‘How to Live with Your Parents (For the Rest of Your Life)’, ‘See Dad Run’, ‘Fumbling Thru the Pieces’, ‘Married to the Kellys’, ‘Along Came Polly’, ‘Miss Match’, ‘A Murder on Shadow Mountain’, ‘Color Me Perfect’, ‘Something Wilder’, ‘Knots Landing’, ‘When No One Would Listen’, ‘My Son Johnny’, ‘The Love Boat’, ‘Having Babies’, ‘The Singles’, ‘Marcus Welby, M.D.’, ‘Night Gallery’ among others.

Lee garnered the Primetime Emmy Award in 1982. In addition, she won the Indie Series Award in 2013. Furthermore, she has also won the Soap Opera Digest Award and TV Land Award. All in all, she has 8 wins and 2 nominations to her name to date.

Lee has not revealed her current salary. However, she has an estimated net worth of around $8 million at present.

Lee has not been part of any notable controversies to date. At present, there are no rumors concerning her life and career.

Talking about her body measurement, Michele Lee has a height of 5 feet 8½ inches and has a decent body mass.  Additionally, her hair color and eye color are dark brown.

Similarly, her Facebook page has more than 2.6k followers.