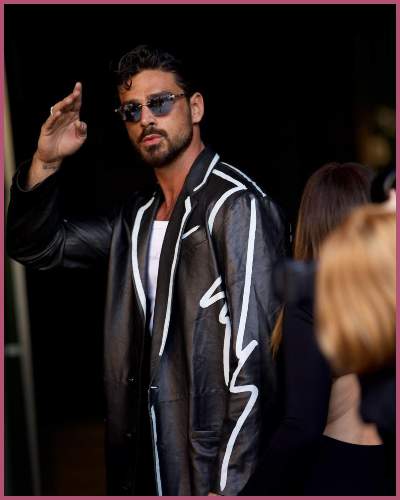 Khloe Kardashian, 38, is presently rumored to be dating an Italian actor Michele Morrone.

Kardashian was seen getting cozy up with Michele during Milan Fashion Week this weekend. Well, the two haven’t yet been confirmed as a romantic couple.

As soon as Fans noticed both of them together many are curious to know more about Khloe’s alleged boyfriend Michele Morrone. Here it goes!

While speaking to PEOPLE, Morrone told,

“It was a major turning point in my life. Before the movie came out I had 4,000 followers on Instagram. And the night after the movie was released on the platform, I woke up and had 2.6 million followers.”

After his succession of the first and second films in the 365 Days franchise, he is reportedly filming one more film to complete the trilogy.

Morrone has previously starred in Italian TV series such as Sirene, Squad 6, and The Process. In 2016, he also took part in the Italian version of Dancing with the Stars in season 11.

Also read An eyewitness account of the Italian honeymoon of the newlywed couple Ashley Iaconetti and Jared Haibon!

He’s passionate about Music and Fashion

Aside from acting, Michele added as a model, singer, and fashion designer to his career portfolio. He is also a professional guitarist and singer. At the age of 25, Michele learned to play guitar by watching YouTube videos.

Further, he also released an album titled Dark Room which featured several songs including one of his most famous songs, “Feel It”.  On February 14, 2020, the album was released, produced by label company AGORA S.A.

Similarly, the 31-years-old actor is an avid fancier of fashion. He makes his designs and also owned a clothing brand, AurumRoma. The brand launched on the 2nd of August 2020, as a women’s beachwear clothing brand.

Michele Morrone is a Father of two

Michele has previously married a Lebanese stylist, Rouba Saadeh. The couple met for the first time through their mutual friend. The couple had a civil marriage in Italy, and Lebanon in an intimate ceremony.

Similarly, the pair shared two sons named Marcus Morrone (b. 2014) and Brando Morrone (b. 2017). However, their marriage didn’t long last end in divorce in the year 2018.

He went into a severe state of depression

The Italian actor, Michele told his fans that he faced severe depression after his divorce from Rouba Saadeh. He mentioned in an Instagram post that he was about to quit everything including his acting career.

However, he came back into the industry in 2020 with one of his biggest hits, 365 Days.

What is the Net Worth of Michele Morrone?

Michele has amassed a handsome amount of wealth throughout his multiple careers as a model, actor, fashion designer, and singer.

His main source of income is his acting and music career. Besides, he endorses and advertises various brands. Michele is the face of the international fashion brand Guess. As of 2022, he has an estimated net worth of around $1 million. His salary and other income are still under review.

Also read A glance at the Secret Italian Wedding of Kelly Brook and Jeremy Parisi!

This is What Michele Morrone has to Say about Khloe Kardashian Dating Rumors!
Tags : Fashion designer Italian actor Model