Michelle is in a relationship. She is currently living with her boyfriend Steve Kazee. Steve is an American actor and singer who has also won Tony and Grammy award. Looking at their relationship, they may soon be getting married.

As for now, they are really enjoying each other’s company. They keep going on vacations or trips to spend the quality time with each other. 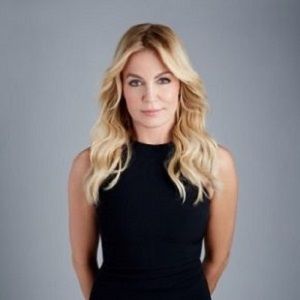 As a woman in sport media, you have to be smart. You use what you can to your advantage and make sure you know what you're talking about or you're A) not going to last very long or B) never going to get a good job. I think we've come a long way and probably still have a ways to go, but... I just don't take any of this super seriously. I'm not curing cancer and I'm not a doctor. It's just television. I don't know why some people get so worked up about it

Those that pulled my credential were actually doing me a favor. I was given a pass to leave an event that already had me feeling uneasy and uncomfortable in my career choice

Aren't rumors great. Anyone can start them. They're a wonderful way to put out feelers. It's like getting the benefits of a publicist without paying one.

Who is Michelle Beadle?

Presently, she is a prominent figure in the media for working as the co-host of the show, ‘SportsNation’. The show airs on ESPN2. Previously, she also served as the host of Winners Bracket on ABC with Marcellus Wiley.

Michelle was born in Italy. Born on October 23, 1975, she is 41 years old as of now. She has dual nationality i.e., Italian and American.

She was born to parents, Bob Beadle(father) and Serenella Paladino(mother). Bob is a former executive at Valero Energy Company. Although she was born in Italy, she spent most of her early childhood in Roanoke in Texas. Later, she was raised in Boerne in San Antonio. She had more male friends growing up as she had a kind of Tomboy personality growing up.

As per her education, she attended Boerne High School. Afterward, she joined the University of Texas at Austin for political science as a pre-law student. She also wanted to pursue a legal career and joined a law group. But she quit it soon to go to Canada. After a couple of years, she also attended the University of Texas at San Antonio. Later she graduated from there.

Michelle initiated her career as an intern for the San Antonio Spurs. Later, she also worked as a reporter there. After that, she joined Fox Sports Net and hosted Big Game Hunters. Afterward, she worked for TNN, CBS, and Travel Channel. She hosted and reported several sporting events. This made her famous and she became a popular face in the media. Additionally, she also reported from Red Carpet at Tony Awards, SAG Awards, Golden Globe awards, and others.

Then on June 1, 2009, she joined NBC. There, she co-hosted “SportsNation”, “Winners Brackets”, and others. Before even joining ESPN, she once worked on ESPN’s “Titan Games”. Later she also served as the anchor for “The Michael Kay Show” on 1050 ESPN New York. But on May 22, 2012, she left ESPN and joined NBC.

She worked at several sports shows there. Eventually, she was back to ESPN in 2014. Currently, she works for ESPN. She serves as the co-host of the show, “SportsNation” that airs on ESPN2. Furthermore, she also interviewed Manny Pacquiao in HBO’s “The Fight Game”.

Michelle has reported several controversial topics and has been part of several controversies. She was part of the controversy in the media. It was after she condemned ESPN colleague Stephen A. Smith for his comment on theRay Rice domestic abuse case’.

Michelle has a height of 5 feet 8 inches. Additionally, she has a body figure of 37-25-35 inches. Similarly, she weighs around 58 kg. She has blonde hair and blue eye.