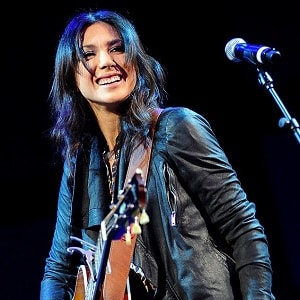 “Music has always been in me. When I sing, I have a sense of peace, I feel like my brain turns off, and I become the core person of who I am - the essence of me. I feel connected to whatever is out there. It's almost like I leave my body and get to watch.”

Michelle Branch was married to her bass player, Teddy Landau on May 23, 2004. They welcomed a daughter named Owen Isabelle Landau on August 3, 2005, but the couple separated in the year 2014 and finally divorced in November 2015.

Recently, she is in a relationship with Black Key’s drummer, Patrick Carney. They met for the first time at a Grammy party. They were engaged on July 2, 2017, on her 34th birthday.

They have not been married but they have given birth to a son, Rhys James Carney in August 2018. She, along with Patrick are living with her son and daughter in Nashville along with two Irish wolfhounds, Charlotte and Darla.

Who is Michelle Branch?

Michelle Branch is an American singer, actress, and songwriter. She is famous for her two top-selling albums: ‘The Spirit Room’, and ‘Hotel Paper’. She was awarded a Grammy Award for Best Pop Collaboration with Vocals’ with Santana for ‘The Game of Love’. She started the country music duo ‘The Wreckers’ in 2005 with her friend and fellow musicians Jessica Harp.

She was born on July 2, 1983, in Sedona, Arizona. Her birth name is Michelle Jacquet DeSevren Branch. She is currently 35 years old. Her father’s name is David Branch and her mother’s name is Peggy Branch. Her father is of Irish descent and his mother is of Dutch-Indonesian and French descent.

She has got an older half brother, Davis and a younger sister, Nicole. She holds American citizenship and her ethnicity is a mix of Irish, Dutch, English, French, German, Scots-Irish/Northern Irish, Welsh, remote Norwegian, Indonesian.

She enrolled in voice lessons at Northern Arizona University at the age of eight and attended Sedona Red Rock High School. In order to focus on her music career, she finished the last two years of her high school education through homeschooling.

She started singing at the age of three and received her first guitar for her fourteenth birthday. After receiving the guitar, she composed her first song ‘Fallen’ within a week.

She made her recording deal with Maverick Records in 2001 and worked with John Shanks to produce her major label debut, ‘The Spirit Room’ in the same year which includes ‘Everywhere’, ‘All You Wanted’, and ‘Goodbye to You’. She made friends with the musician Justincase and collaborated with him on several of the songs on his 2002 self-titled album. Michelle worked with the musician and songwriters Santana, Gregg Alexander, and Rock Nowels to produce the song ‘The Game of Love’ in 2002.

She released her second album ‘Hotel Paper’ in 2003 which became No. 2 on the Billboard 200 chart and earned a Grammy Award nomination for the singles ‘Are You Happy Now?’.

She also made her appearance in several films or television shows as a musical celebrity and hosted MTV’s ‘Faking the Video’ with Nick Lachey and JC Chasez in 2004.

She, along with Jessica Harp formed the duo ‘The Wreckers’ in 2005 and released their album ‘Stand Still, Look Pretty’ in 2006 in which the single ‘Leave the Pieces’ which topped the Billboard Hot Country Songs chart.

The duo contributed to Santa’s album ‘All That I Am’ and joined musicians Rascal Flatts on a U.S. tour in 2006. In 2007, the duo split up in order to focus on their solo careers.

She performed in live shows with her sister Nicole during the late 2000s in which she provided the backing vocals. She worked with other artists like Chris Isaak and sang songs for them which was featured on their albums.

In 2010, she came up with her extended play ‘Everything Comes and Goes’ and the single from the play, ‘Sooner or Later’ was a minor hit.

She announced that she made a collaboration with Verve Records on July 17, 2015. Michelle sang ‘Goodbye Ted Cruz’ in May 2016 and Entertainment Weekly released her new album ‘Hopeless Romantic’ on April 7, 2017. She split up with Varve Release in September 2017.

Michelle, along with Patrick Carney performed a cover song ‘A Horse with No Name’ in episode 4 of Bojack Horseman titled ‘The Old Sugarman Place’ which also appeared on the soundtrack album of the series.

He was awarded Grammy Award for Best Pop Collaborations with Vocals for the song ‘The Game of Love’.  He got MTV Video Music Award in the category Viewer’s Choice in ‘Everywhere’ in 2002, MusicRow Awards in the category Major Label Breakout Artist of the Year in 2007 and nominated for many works.

She has an estimated net worth of around $15 million and her main source of income is from her top-selling albums like ‘The Spirit Room’ and ‘Hotel Paper’.

She is secretive about her personal information and she has not been engaged in any rumor, controversy, and scandal in her private and in her professional life.