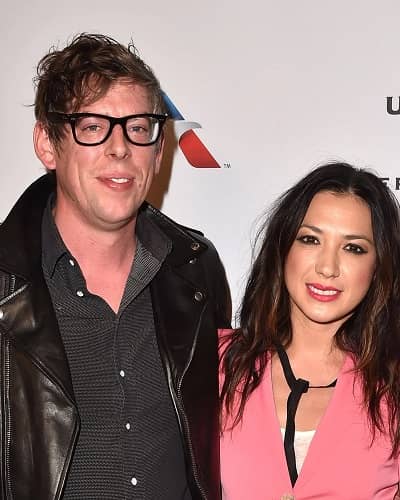 Michelle Branch had a miscarriage in December 2020. She and her husband Patrick Carney failed to become parents for the second time. Michelle shared five pictures of her and her family and wrote,

“Just when we were rounding third and heading home (A baseball metaphor?! I know.) 2020 was like, “nah, I ain’t done yet.” December decided to really finish us off with a bang! No, literally. A bomb went off in downtown Nashville yesterday.  And to further twist a dagger in my heart, I experienced my first miscarriage”

They have a son together named Rhys James Carney who was born on 28th August 2le018.

How did Michelle and Patrick meet?

Michelle Branch and Patrick Carney met each other at a Grammys party in Los Angeles. They began writing and recording songs together. Similarly, they co-produced the song Hopeless Romantic and began falling in love with each other. Patrick proposed to her in the year 2017 on the eve of her 34th birthday.

“Thank you for all the birthday love and wishes. Last night, right before I blew out my candles, Patrick asked me to marry him and then I had nothing left to wish for … 34 might be the best year yet,”

They had planned to get married in 2018 but Michelle was pregnant with their first child so they postponed till 2019.

Michelle Branch and Patrick Carney walked down the aisle on 20th April 2019. Their wedding took place at the Marigny Opera House in front of friends and family. She wore a bohemian-style wedding dress with intricate lace detailing, her hair in loose waves that cascaded down her bare shoulders.

The wedding site was filled with many stained-glass windows and archways, and the aisle was lined with greenery and tall, golden candelabra.

They walked down the aisle with Michelle singing I Can’t Help Falling in Love With You. Their wedding cake was a four-tier confection that was frosted resembling pearls adorning each layer and the entire cake was split in two and covered with fresh flowers on both sides.

How much is the net worth of Michelle Branch?

Michelle Branch has an estimated net worth of $15 million. Her studio albums are Hopeless Romantic released on 7th April 2017, Hotel Paper on 21st June 2003, The Spirit Room released on 31st July 2001, and Broken Bracelet released on 1st June 2000.

Similarly, her singles are Everywhere, All You Wanted, Goodbye to You, Are You Happy Now?, Breathe, Sooner or Later, Loud Music, Hopeless Romantic, and more. Also, her film work includes Buffy the Vampire Slayer, American Dreams, The Hot Chick, Charmed, One Tree Hill, and Hell’s Kitchen.

Michelle Branch is an American singer, actress, and songwriter. She is famous for her two top-selling albums: ‘The Spirit Room’, and ‘Hotel Paper’. She was awarded a Grammy Award for Best Pop Collaboration with Vocals with Santana for ‘The Game of Love’. Likewise, she started the country music duo ‘The Wreckers’ in 2005 with her friend and fellow musician Jessica Harp. Read more bio…