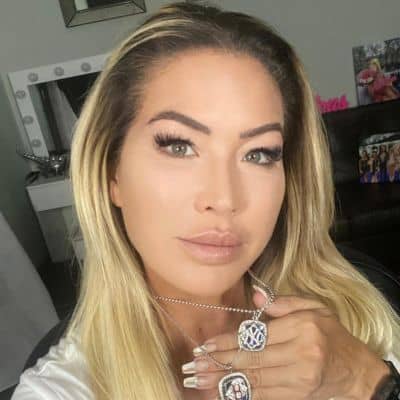 Who is the husband of Michelle Damon?

Michelle Damon is living a blissful conjugal life. She is married to a TV personality and Former baseball player, Johnny Damon.

The couple officially got married somewhere in 2004. Together they have become parents to six kids. Their first child daughter, Devon Rose was born in 2007, their second child Danica was born in 2008, then followed they gave birth to twins Dasha and Daliah in 2012.

There is no info available on the past relationships of Michelle Damon.

Who is Michelle Damon?

Michelle Mangan is a celebrity wife, former TV personality, businesswoman, and philanthropist. She is best known to be the wife of former Professional baseball outfielder, Johnny Damon.

Similarly, she has appeared in the reality TB show POWW: Powerful Women of Wrestling.

Michelle Damon was born in the United States on May 15, 1971. Damon is 51 years old as of 2022 and holds an American nationality. Her ethnicity is Caucasian and she has the birth zodiac sign of Taurus according to the astrologers.

She was brought up by her Irish descent parents. Her father used to work at Kraft Foods while she was young. No further info about her parents, siblings, or educational life has been disclosed yet.

Michelle Damon bought her first house with the money she earned from working at Kraft Foods when she was 19 years old. Later, after marrying her husband Johnny Damon, the duo introduced their own business company titled, ‘J and M Investments.’

In the early 2000s, she served as an office director for a talent scouting company. She is also a philanthropist who has donated money to the community. She is the co-founder of ‘The Jonny Damon Foundation’ along with her husband. It aims to provide support for disadvantaged at-risk children and also organize leadership programs at the local and national levels.

Besides Michelle, her husband, Johnny Damon has also amassed a successful career as a former baseball player.

Johnny Damon debuted as a baseball player during his college days. Kansas City Royals drafted him in the first round (35th overall) of the 1992 MLB draft on August 12, 1995. From 1995 to 2000 he played on the behalf of Royals.

He became a member of the Oakland Athletics in the 2001 season. He dealt with athletics in a three-team transaction including Mark Ellis from the Loyals and Cory Lidle from the Devils Rays.

Damon signed a four-year, 31 million USD contract along with the Boston Red Sox on December 21, 2001. Then, he topped the league with 11 triples. He was the first player to be selected by the fans with the highest votes in the 2002 MLB-All Star Game. In a four-game sweep World Series, Boston Red Sox won the game over St.Louis Cardinals after, Damon hit a home run.

Then, he signed a 52 million USD, four-year contract with the New York Yankees on December 20, 2005. He was credited for stealing two bases in a single play, which lead the Yankees towards the victory over Philadelphia Phillies during the 2009 world series.

He then made a one-year 8 million USD contract with the Detroit Tigers on February 20, 2010. The Tigers defeated Baltimore Orioles with a 7-5 win. Later, he played for Tamp Bay Rays in 2011, and Cleveland Indians in 2012.

In the 4 and 5 seasons of the show, ‘Below Deck Mediterranean’ he made appearances as charter guests along with his wife, Michelle Damon in August 2019.

Michelle Damon has an estimated net worth that ranges between 1 to 5 million USD. But, along with her husband, Johnny Dam, their jointly net worth is accumulated to be more than 40 million USD.

These are the outcome of their hard work.

Michelle Damon has not been involved in any sorts of unnecessary rumors and controversies as she is able to maintain a clean profile.

Michelle Damon is 5 feet 5 inches tall and weighs around 56 Kg. Moreover, the measurements of her amazing physique are 36-25-34 which means her bust size is 36 inches, waist size is 25 inches and hips size is 34 inches.

Damon has a couple of brown eyes and blonde hair.

Michelle Damon does not appear to be active on Facebook.

Find out which couple looked the best: 6 Best Dressed Couples in Oscar 2017…