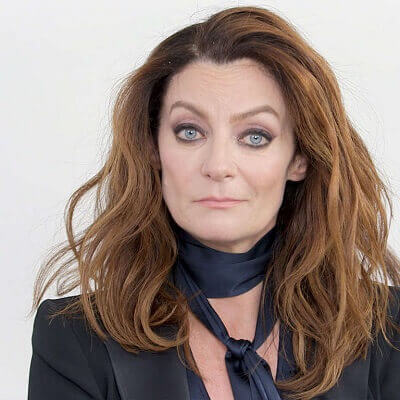 I was trying to explain that this is actually a proper job but just feeling terribly ridiculous as real doctors and real patients were wheeled past. There are moments when you think what am I doing with my life? - On filming "Green Wing" in a real hospital

I'm a Doctor Who (2005) fan and I realise what it meant to change the Master to a Mistress. It was a massive deal, but I didn't want to think about it too deeply. The gender thing doesn't seem an issue at all, which surprised me

Lots of actresses disappear by the time they're my age. So far, I've bucked the trend. I haven't got sucked into that 26-episode run of something like Casualty. Thankfully, my face has stopped that happening. It's not something you want to see every week on TV! I'm theatrical saffron in that way - just a light sprinkling of me here and there

So this personal trainer says it's time to check my BMI. What's my BMI? It's Body Mass Index, that tells me how much fat you have in your body, measure and weigh you. Whoa! Look at the scale. And I can see it- and she gets this device and measures all the jiggly bits, you know, you wouldn't want to see jumping up and down in front of a mirror. Not my toned bits. And I said I've just had a baby and she says well that's a baby but there's no excuse and the computer never lies. So what's a good BMI? Anything from 17 to 24. What's mine? 35. And as you can see, you're in the red. You're obese. So you're going to have to make some changes. And I said, yes, I will make some changes. You.

Michelle Gomez is a married woman. She is married to Jack Davenport. Her husband, Jack is also an actor. He is best known for portraying Norrington in the internationally popular franchise, Pirates of the Caribbean, and Lancelot in Kingsman: The Secret Service.

The couple first met at a bar Beak Street in 1997. They dated for a couple of years before deciding to get married. About her husband, she recalls,

“Jack wasn’t my type at all. I thought he was too young and too posh and I told him that. Plus, I couldn’t deal with his dodgy bowl-cut. But he wore me down.”

They exchanged wedding vows on 1 May 2000. They have now been married for two decades.

From their marriage, they have one child. They were blessed with a son in 2010 and have named him Harry Davenport.

Who is Michelle Gomez?

Michelle Gomez is a Scottish actress. She is best known for work in The Book Group, Green Wing, Bad Education, Chilling Adventures of Sabrina, etc.

Michelle Gomez was born in Glasgow, Scotland on November 23, 1966. As of 2020, her age is 53. She was born to parents Tony Gomez (father) and May Gomez (mother). Her father was a photographer whereas her mother ran a modeling agency.

She was interested in acting from an early age. She got the inspiration to become an actress after seeing a production of Kiss Me, Kate at the age of seven. Her parents supported her decision and helped her achieve her dreams.

Her ethnicity is Portuguese-Montserratian, Scottish.

Talking about her education, she joined Shawlands Academy in 1978 and graduated from there in 1983. After that, she followed her dreams and trained at the Royal Scottish Academy of Music and Drama.

Michelle Gomez got her acting debut in 1998 with the film, The Acid House. Following that, she landed a role in the comedy, The Book Group. After that, she portrayed Sue White in yet another comedy-drama called Green Wing.

After several other roles, she made an appearance in the movie, Chromophobia (2005). A year later, she had a starring role in The Good Housekeeping Guide. A couple of years later, she guest-starred in the Doctor Who audio play Valhalla which would go on to be one of her career-defining roles.

She had a recurring role in the series 8, 9, and 10 of Doctor Who. She portrayed the character, Missy. However, the true identity of her character was revealed in a thrilling two-part finale as a female incarnation of the Master, the nemesis of the Doctor.  It was also the first time that a Time Lord had become a Time Lady.

She joined the Royal Shakespeare Company in 2008 where she performed as Kate in The Taming of the Shrew. She also toured with the company.

In 2018, she joined the cast of the popular Netflix horror series, Chilling Adventures of Sabrina. She portrays Lilith / Madam Satan and Mary Wardwell in the series.

How much is Michelle Gomez worth?

Michelle Gomez has an estimated net worth of around $1 million. She has earned a good sum of money from her acting career. There is no information about her annual salary. On average, a Hollywood actress earns around $45k a year.

The Scottish actress stands at a height of around 5 feet 4 inches. She weighs around 51 kg. Her eye color is grey and her hair is brown in color. There is no information about her body measurements for breasts, waist, and hips. Similarly, she has not revealed her bra size, dress size, etc.

The actress has not been involved in any controversies. She has been able to keep herself away from any type of controversy and scandal. So far, she has not done anything controversial in her acting career. Similarly, there are no rumors about her of any kind.

You may also like to read the Bio, Career, Body Measurements, Net Worth, Social Media, Relationships, and more about Jack Davenport, Slade Smiley, Nick Cordero, and more.