Michelle McCool is a married woman. She exchanged her vows with legendary wrestler Mark Calaway, professionally known as The Undertaker.

They got married on June 26, 2010, in Texas. This couple together has a daughter named Kaia Faith Calaway born in August 2012.

Previously, Michelle was married to her high school boyfriend Jeremy Louis Alexander in 2001. Later, they got divorced in 2006. 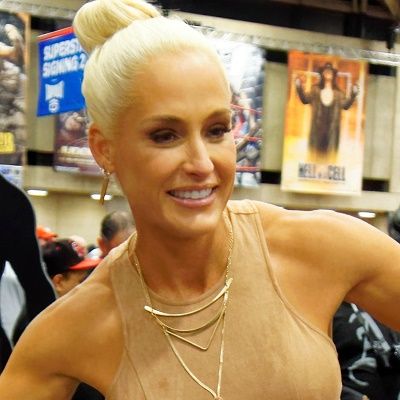 Who is Michelle McCool?

Michelle McCool is an American professional wrestler. She is best known as a former WWE Divas Champion and WWE Women’s Champion.

This wrestler was born on January 25, 1980, in Florida, the United States. Her birth name is Michelle Leigh McCool and she belongs to Irish descent.

Her father’s name is Terry, a superintendent and her mother’s name is Jenny, a teacher. She has an older brother. Her brother played football at the University of Cincinnati.

McCool has competed in National Physique Committee fitness, contest, taught gymnastics and kickboxing, and also worked as a personal trainer.

Earlier, she worked as a middle school teacher in Florida. In 2004, she joined WWE after participating in the WWE Diva Search. In 2008, at The Great American Bash, she became the inaugural WWE Diva champion.

Afterward, Michelle won the WWE Women’s championship at The Bash in 2009. She is the first female wrestler to have held both titles.

Later year, she unified both titles on the occasions, which makes her ranked number one in Pro Wrestling Illustrated‘s Female 50. The following year she retired.

She appeared on six episodes of the game show ‘Family Feud‘ with other several WWE Wrestlers and Divas. She also appeared in the episode of ‘Project Runway. Michelle made her appearance of ‘The Best Damn Sports Show Period’ with John Cena. She has appeared in six WWE video games.

There was rumored that McCool may return to wrestling. Rumors hit the media saying McCool ruined her WWE career after marrying ‘The Undertaker’.

Michelle has over 886 K followers on Instagram and around 813.6 K followers on Twitter. Although she is not active on Facebook, there are many fan pages of McCool made by her well-wishers.