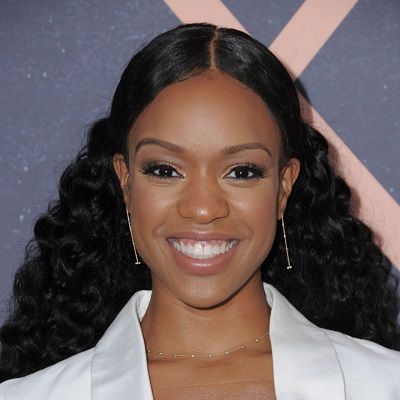 Michelle Mitchenor has been married to Seven Seconds actor Coley Mustafa Speaks. They tied the knot during an intimate courtyard wedding ceremony in Los Angeles on October 14, 2018.

The couple had first opted to celebrate their marriage at THE LONDON West Hollywood hotel. The hotel is known for its spectacular city views.

The pair exchanged rings in front of their beloved friend and family members. The rings were inspired by the theme of “cosmic love” and it was designed by Canadian designer Emily Elizabeth.

Michelle Mitchenor is one of the American actresses who is best known for playing the role of Detective Sonya Bailey on the FOX hit action comedy-drama TV series Lethal Weapon.

She is also known for her role as Indigo in the musical-drama film Chi-Raq.

Michelle Mitchenor was born on April 21, 1988, in Trenton, New Jersey, the United States of America. Names and details about her father and mother are unknown.

As for her education, Michelle has attended Ocean County Performing Arts Academy High School in New Jersey where she studied dancing and acting.

Michelle Mitchenor later joined attended Towson University from where she has completed her graduation in Bachelor of Fine Arts for dancing.

Michelle Mitchenor loved dancing and acting since her childhood. She made her acting and movie debut with Spike Lee’s musical-drama film, Chi-Raq, in 2015.

Her other television and film credits include Monica, Last to Love as Sydney (9 episodes), The Marriage Tour as Kelly, and Black Boots as Zoe Young.

She hasn’t received any awards in her career and life.

Being a successful American actress, Michelle Mitchenor earns a good amount of money from the film and television industries.

Her exact net worth is unknown but looking at her lavish lifestyle we can assure that her total fortune is probably in millions.

The exact salary of Michelle is also under wraps. However, according to payscale.com, the average salary of an actor in the United States is $50 (hourly) and $50,000 (annual).

She has an expensive house in New Jersey but details about her cars are not available.

Michelle hasn’t faced any controversies and rumors regarding her personal life and career.

The actress stands with a height of 5 Feet 6 Inches. Likewise, she weighs 61 kg. She has black colored hair and eyes.

Talking about her Instagram page it holds over 45.6K followers. Her Facebook page also has over 5K foll0wers.

Click on the link to know the bio of Meagan Good, Ryan Haddon, Lucy Watson, and Nick Cannon.